When Goose Creek planter John Mackenzie donated his substantial library to the College in 1771, there was just one hitch: The College didn’t yet exist. Sure, it had been founded a year earlier, but the College was still without a few critical components, namely students, buildings and books. Mackenzie, however, reasoned he could help resolve at least one of those pesky little details. 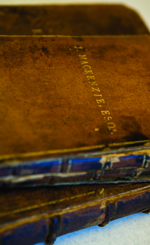 It was decided that the books Mackenzie donated would be stored at the Charleston Library Society until the College could be built. Seven years later, the great fire of 1778 destroyed most of the Library Society’s books, including, it was thought, the Mackenzie collection. Sadly, no College scholars would ever crack the spines of Sir Walter Raleigh’s The History of the World (in five volumes, 1736), William Sherlock’s A Practical Discourse Concerning Death (1759) or any of the other hundreds of titles concerning art, history, law, philosophy, science and more. The Mackenzie collection – which South Carolina historian Walter Edgar ranked as one of the largest and most valuable libraries in colonial South Carolina – was, for all intents and purposes, lost.

But during an inventory of the Library Society’s holdings in 1980, a librarian found a cache of books with Mackenzie’s name tooled in gold on their covers. She compared the titles to a catalog of Mackenzie’s collection and confirmed that these books had survived the fire more than 200 years earlier. In short order, the Library Society transferred the singed volumes to the College. Finally, at least a portion of Mackenzie’s generous gift had found its intended home.

Now those books sit in the College’s Special Collections Department on the third floor of the Marlene and Nathan Addlestone Library, and they’ll soon have some additional company on the shelves. The College’s Friends of the Library – intent on finding copies of each book originally donated and conserving the few that have survived – is beginning the restoration of the original Mackenzie collection.

Besides honoring the intended receipt of the original gift, the initiative allows scholars to glimpse the years when the College was first forming.

“Instead of what people were wearing, it’s what people were thinking. You can trace the ideas back, you can see what was important and looming in their lives,” says Harlan Greene (pictured above), senior manuscript and reference archivist at the Addlestone Library. “You can get a profile of the intellectual life of Charleston at the time.” 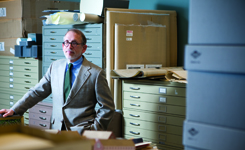 Perhaps one of the missing titles is on your family bookshelf. To review a list of books being sought by the College, and to learn more about making a contribution to this effort, please visit blogs.cofc.edu/friendsofthelibrary/ or contact Jenny Fowler at 843.953.6620 or fowlerj@cofc.edu.