A Taste of True Hospitality

For a month last summer, 15 creative writing students made their home in the small hillside town of Spoleto, Italy, with English professors Bret Lott and Emily Rosko. There, they worked on crafting poetry, writing travel memoirs and discovering a new world.

After two weeks in Spoleto, I had become disenchanted with beautiful things – the rolling hills of green, dappled with olive trees; the waves of red poppies and suntanned, ancient towns piled below blue mountains; the high-ceilinged, dimly lit churches and bright, white-washed museums full of art; the crumbling frescoes; even the ruins.

I was looking for something else. I was restless to search through the labyrinthine streets of Spoleto, as if there were something I still had yet to discover.

Being a dreamy suburbanite who’d seen New York City once, had never left the eastern United States or even flown in a plane before this trip, I was waiting for something to wake me up, for something awe inspiring. Sure, I had experienced something ineffable in Saint Peter’s Basilica, some feeling I can’t encapsulate in writing. And I had been taken aback by a fat man in a purple polo singing for no one in a roadside ristorante – a portrait of pure, plain happiness. There was something to be said, too, for the experience of strangers suddenly placed in close quarters all hours of every day. Still, I didn’t feel the need to fully document this trip until Ricotta Night. 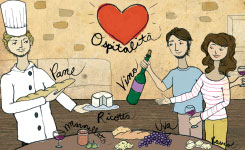 Our study abroad program was unlike others. We were not placed in homes with those that spoke the language. Rather, we stayed in a gorgeous villa, isolated high on a hill just outside the city. At times, I felt we were more focused on our own writing community, on our poems and our memoirs and each other, than on fully experiencing Italian culture.

The second week, we took a cooking class at Locanda Rovicciano, a restaurant located on the bottom half of Chef Andrea’s 17th-century home. We wore tall, white chef’s hats and striped aprons. We were taught the basics and encouraged to dip our fingers in absolutely everything.

“I love everybody, I love you!” he sang, which sounded straight out of the ’80s. He hardly spoke a spot of English otherwise.

We plated our own dishes, brought them out to the patio and poured wine and water. We ate broiled flowers filled with smooth, blended cheeses and dipped in blended tomatoes and mozzarella cheese. We ate mini eggplant parmesan, then vegetarian lasagna, lamb and, for dessert, chocolate with cream. We drank limoncello made by Chef Andrea. Chickens, whose eggs we had used, clucked in the backyard and sprinted along the gates, their thin legs visible through the bushes.

Chef Andrea passed around his iPhone with pictures of his children, a proud smile on his face. Between puffs on a cigarette, he spoke of his friend just down the road who held a night job making cheese.

“Would you like to meet the man who makes my ricotta?” he asked.

“Oh, of course!” Professor Lott answered. “Yes. Could we? Could we arrange that?”

Andrea called his friend, then asked for us to return around 10 p.m.

That night, Chef Andrea left a packed restaurant under his wife’s care so he could drive us to the house where the ricotta was made and also serve as our translator. I expected to be brought out to a barn and watch a man, dressed in overalls perhaps, milk a moaning goat by candlelight. Instead, we were welcomed into a house. The house had a remarkable smell, a rich combination of warmth, old wooden walls, cooked meals and dried flowers.

We were brought into the kitchen, a cozy room with a stove in the corner, a table in the center and a low red couch by the window. Two men and a woman – father, son and wife – stood by the kitchen counter and spoke to Chef Andrea in Italian. Andrea briefly explained the nature of our program: that we were writing students from the United States.

We stood clustered around the stovetop, watching the son stir a huge pot of cheese and water over low heat with a stick. He explained to us that first they would collect what was considered pecorino cheese and then later scoop out what was left at the bottom, ricotta cheese. In the background, an Italian soap opera played on the television on the counter.

As father and son quickly shaped cylinders of pecorino cheese out of the water and into wheels, the woman of the house cut bread into perfectly even pieces and placed them in a circle on the plate. She took week-old pecorino cheese from their refrigerator and soon added a bowl of ricotta, just scooped off the stovetop. She got out homemade fig and blackberry jam and a bowl of blackberries picked from their backyard. She piled paper plates and urged us, with her hands, to begin eating. She left the room for a moment and returned with two pitchers of homemade wine. We sat at their kitchen table and on the couch, while they leaned against the countertops.

I had never liked ricotta cheese. I didn’t want to refuse food or a new experience, but in my memory, ricotta was a gritty cheese with sour cream consistency, which I picked out of my mom’s lasagna with a grimace. I tried it to be polite and tasted an understated flavor, with the consistency of soft, scrambled eggs that nearly melted down my throat. On soft bread with sweet fig jam, the flavor was illuminated. I loved ricotta cheese, I realized. This was ricotta (not rih-caught-ah, but rih-coat-ah).

We students spoke amongst ourselves; only one of us, Raena, spoke some Italian. Professor Lott, equally inept in Italian, broke our walls, insisting we speak outside ourselves. Chef Andrea translated who we were, where we each came from (all from different states, we learned) and who our hosts were, what they did every night after their day jobs were over. We talked about Spoleto and Charleston, sister cities. Lott asked if they would ever consider visiting. He had already invited Chef Andrea. Despite the language barrier, the woman spoke looking into our eyes. She laughed with us as if she understood.

We ate and we ate. One student from Philly asked them if they had a phrase similar to “what can ya do?” and the woman replied, simply, “You can eat!”

Food did seem the answer to all problems, all earthly and/or metaphysical woes. She continued cutting more cheese and bread and refilling our glasses until our bellies were full and our cheeks were warm.

“Is it really midnight?” Lott interrupted the conversation. “I don’t want us to wear out our welcome. I think we need to head home,” he told them.

We thanked them, “Grazie, grazie mille!”

We thanked them with each step toward and outside the door until we at last found our seats in the van and drove off into the night.

I sat there mystified. The hospitality there was something that had yet to be defined – stronger and warmer than the words I had to describe the welcome of these Italians. There were maps made for places, there were encyclopedias for the museums and art I had admired, there were endless books on cathedrals. The people, though, were all I cared to write and learn about. A respect for the people of Spoleto emerged that night. And I would grow to cherish and remember the glimpses I got of people living as they really live in a place they call home.