If you want to inspire him, give Edward Hart ’88 a johnboat and a tank of gas. He’ll happily zip along the Lowcountry waterways for hours, slipping away from mankind and straight into God’s country. Surrounded by sandbars and spartina grass, he’ll marvel at dolphins feeding along the shore and cast for spottail bass.

“When the line grabs, it’s like the first time you ever caught one,” says the music professor, whose office wall is adorned with a photo of the mammoth 42-pound bass he hooked as a 10-year-old. “You always see amazing things out there, and you never see it all.”

South Carolina’s natural beauty has been a lifelong inspiration to Hart, a native Charlestonian. An eight-point buck hangs above the photo of the bass, and Hart admits that he probably could cast a shrimp net before he could read.

Hart’s local delights, however, are not limited to the natural world. The downtown resident speaks with equal regard of Charleston’s architectural and cultural beauty and, when pressed for a special urban memory, he quickly recalls a moment he shared with his daughter when she was a toddler: He was walking her in a stroller down Church Street at dusk one spring evening and everything was just perfect, including the temperature, the light on the buildings and even the scent of flowers on the wind. Hart’s young daughter turned around to look at him and share a knowing glance. 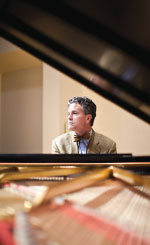 Hart’s daughter is 11 years old now, but the Hart family’s enthusiasm for their surroundings has not dimmed. Hart, in fact, recently composed a violin concerto expressing his love for South Carolina for friend and fellow College music professor Yuri Bekker. In February, Bekker performed the concerto with the Charleston Symphony Orchestra, where he also serves as concertmaster. To boot, Bekker performed Hart’s piece on a rare Stradivarius violin made in 1686 in an event Bekker deemed a “privilege and an honor for Charleston.”

Under an Indigo Sky features three movements, each evoking South Carolina’s distinct geographic regions: the Lowcountry, Midlands and Upstate. Each is familiar to Hart and holds its own special appeal, as Hart lives in Charleston, went to graduate school at the University of South Carolina in Columbia and was married in Greenville, the childhood home of his wife. Hart knows many of his listeners likely have a similar affinity for the Palmetto State, but stresses that the charms of South Carolina should not have a bearing on opinions of the quality of his music.

Funnily enough, though, his compositions nearly knock him down. He has trouble sleeping when beginning composing and can become ornery. He admits feeling susceptible to the pressure associated with contemporary composition that one must “reinvent the wheel every time you sit down.” It can be slow going when writing a new piece, and take a while for his music to take shape.

“Writing a piece of music is like picking a fight with musical notes,” says Hart. “Eventually you start winning the fight, but not without being battered and bruised.”

When not composing, Hart practices “musical evangelism,” which includes teaching music appreciation classes to non-music majors at the College. For him, it’s critical to introduce as many people as possible to classical music, both for broadening students’ cultural knowledge and enjoyment as well as for the survival and growth of classical music. In line with that goal, Hart and fellow College music professor Yiorgos Vassilandonakis have teamed up to create Magnetic South, a concert series at the College featuring the Charleston Symphony Orchestra playing 20th-century music and new works by living composers.

Hart hopes Magnetic South’s emphasis on contemporary and relatively modern music inspires a new generation of music lovers and appreciation for compositions beyond the most revered classics.

“I love Beethoven, Bach and Brahms, but if we don’t infuse music with something new, we’re going to see audiences get grayer and grayer until they’re gone,” he observes.

And while promoting the work of others, Hart will continue to create his own masterpieces, with inspiration found right outside his window, and, more powerfully, out on the rivers and deep inside South Carolina’s woods.

“Until this area quits inspiring me,” Hart says, “I’m going to keep dealing with it.”