The multitalented artist’s résumé includes play dates with Will Hoge, Seal, Crowfield and Sol Driven Train as well as a runner-up honor in Beyoncé’s touring band. But the road to such international success has been a long one.

Seventeen years ago, when she was attending high school in Mt. Pleasant, the 14-year-old Handel became the youngest member of the prestigious Honor Band of America, which took her on her first trip to Europe. Surrounded by the best young musicians in the nation, she was inspired to achieve more, more, more.

Still, there were times when she was tempted to give up music and trade it in for her other love: softball. But, with a little prodding from her parents, she stuck with it, eventually landing a scholarship to study classical music in Georgia. Two years into college, she went on tour with the off-Broadway production Blast! and its later iteration, Blast! 2, traveling throughout the U.S., Canada and Japan. At only 20, she was once again the youngest in the show, a rollicking, marching band–style production that made every member feel like a star. 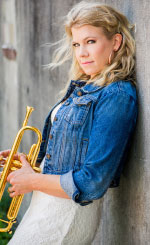 Three dazzling years and several passport stamps later, she was at home on the coast with a new boyfriend by her side (future husband, Jeff Handel, whom she met on the tour).

So, what next? she thought.

Handel knew she wanted to put down roots and be close to family, and it was convenient that the College boasted a top-notch music program. However, it didn’t offer classes for classical trumpeters like Handel.

“I already had two years of music under my belt, and CofC’s programs were more concentrated in jazz for wind instruments. I didn’t know anything about it, but I thought, How hard can it be? Well, it was the most challenging time of my life,” Handel concedes. “Classical and jazz are completely different languages, even though they’re both music. It was like comparing Chinese and Spanish.”

Handel was essentially starting at zero, and the experience was a humbling one. Fortunately, she had a great group of jazz combo professors to guide her way – and, eventually, percussionist Quentin Baxter ’98, pianist Tommy Gill, conductor Charlton Singleton, composer and saxophonist Robert Lewis and acclaimed bassist Frank Duvall helped her realize that, with jazz, it’s more about the ear than the eye.

She stopped reading sheet music. She started listening to performers at local jazz clubs. And she started spinning CDs by the greats – think Clark Terry and Chet Baker – at every spare moment. She trained herself to go from jazz to classical gigs seamlessly: a skill that served her well when she took a job as an on-call sub for Michael Bolton’s trumpeter.

“If the trumpeter couldn’t make the show, I would fly out and do it,” says Handel, now a full-time backer for Bolton’s band – which has become her rock ’n’ roll touchstone.

“They’re seasoned performers, and they always let me jam with them before sound check or pick their brains about all sorts of things,” Handel says, adding that Bolton is very generous, often taking the crew out to dinner on his dollar, so they can hang out, relax and have fun together. “They’re always really nice restaurants. He loves Italian food. It’s always Italian.”

More than anything, Bolton has given her the opportunity to travel the world to countless cities and all six habitable continents.

Because, even when she’s not on tour, you just can’t stop her music.