Find a Planet, Become a Star

Some students find self-confidence at college. Some find that special someone to grow old with. Some find their life’s calling, their purpose, their direction. Thea Kozakis and Laura Stevens found a planet.

The planet’s name is Derek, or, to be technical about it, kappa Andromedae b. It exists 170 light years away from Earth, within our galaxy, and is part of the Andromeda constellation. Derek, one of about 850 planets that have been discovered outside our solar system, is more than 100 times the size of Earth, full of hydrogen, and, says Stevens, “big and hot and kind of gross” – much like an extra large Jupiter.

Kozakis and Stevens, both seniors, discovered the planet while conducting research for astronomy professor Joe Carson, who himself was part of a team of researchers that discovered a planet-like object circling star GJ 758 in 2009. This feat – which Time magazine named one of the top 10 scientific discoveries of that year – was remarkable because Carson and his colleagues obtained a direct image of their discovery. The bulk of new planets is detected indirectly through telescopes, such as by seeing how a nearby star dims when the planet passes before it. 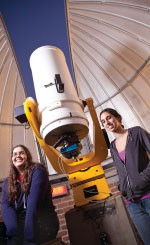 Like Carson, Kozakis and Stevens obtained a direct image of their newly found planet through a Subaru telescope at an observatory atop the volcano Mauna Kea on Hawaii’s Big Island. For the past two years the pair analyzed about 30 stars they thought most likely to have orbiting planets. Because there is much demand from scientists for use of the telescope in Hawaii, Kozakis and Stevens would ask Carson to submit a few targets every two months to the telescope administrators and then wait patiently to receive a set of 50 to 100 images of the stars. The duo would then manipulate the images with software, reducing the glare from the bright stars with the hope of revealing a planet.

Most attempts yielded no result, but one day last semester, voila! Kozakis and Stevens realized they had something.

“Look, I think I found a planet,” Kozakis said to her boyfriend when he stopped by the lab to pick her up for lunch.

At home for Thanksgiving, Kozakis got mixed reactions about the discovery, with some of her Greek-American relatives congratulating her, and others more concerned about the fact that she hasn’t yet married. Her parents, at least, are very proud of her. Her mother has told everyone she knows, though her father says he has come to expect such accomplishments from her.

Stevens, for her part, has gained some celebrity status in Charleston, being recognized around town following publicity about her discovery. 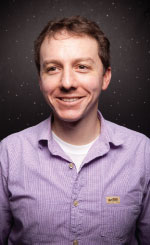 Additionally, Canadian brewer Howe Sound has honored Stevens and Kozakis by naming its grapefruit-tinged “Super Jupiter” India pale ale after the newly discovered planet. Apparently, the brewery was looking to make a beer that was “out of this world,” if not also our solar system.

The students give thanks to their mentor, Carson, who Kozakis describes as “a really good adviser” and “accepting of our mistakes. He’s really nice and really approachable.”

Carson returns the compliment, and credits his students for their inspiring and steadfast work. He knows of no other undergraduates who have found a planet, and is proud to say they made such a breakthrough on their own.

“There’s only one case,” Carson says, “and that’s them. It’s neat they were able to be the engine of the discovery and not just a side part. It’s a very big deal.”

That’s high praise coming from Carson, who tells his student researchers that he doesn’t expect them to match peers at universities like Harvard and Princeton, but to best them. In this case they certainly did, and Carson says the discovery is akin to opening Pandora’s box, as there are so many new scientific questions to explore regarding the planet, including what kind of life it could support.

People, says Carson, can underestimate undergraduates and the contributions that young adults are capable of making to the world of science. Kozakis and Stevens, he notes, have demonstrated that hard work and intelligence can make up for inexperience. That said, even Carson finds their work astounding.

“I certainly wasn’t doing that when I was their age,” he laughs.