Student Relies on Math for his NCAA Tournament Bracket – How’s He Doing?

By Editor|2020-02-25T13:06:23-05:00March 21, 2014|Campus Life|Comments Off on Student Relies on Math for his NCAA Tournament Bracket – How’s He Doing?
There’s a lot on the line for basketball fans who submitted a NCAA tournament bracket to the Billion Dollar Bracket Challenge, and College of Charleston junior Stephen Gorman has a secret weapon: Math. Gorman developed his own weighting algorithm to make his picks. He started with the Massey rating model (which has 65 percent accuracy on its own), then looked at each game individually. He gave more weight to teams that play against other really good teams and beat them, and minimized the benefit that a good team gets by beating a poorer opponent.

“For this March Madness, I added to my weighting system by incorporating something I like to call ‘coach ratings.’ Fellow math major John Sussingham and I created coach ratings to incorporate the number of previous March Madness appearances that the coach has with his team, along with how well they did in those tournaments (like how many times they made into the Sweet 16 and Final Four).” 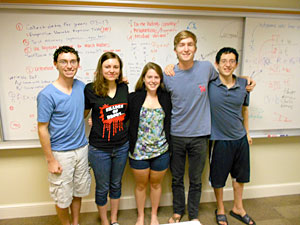 Gorman knows what he’s doing. He has spent the past year working on sports rankings and last summer, he participated in a Research Experiences for Undergraduates (REU) internship with one of the nation’s top bracketologists, Tim Chartier.

It was College of Charleston Mathematics Professor Amy Langville who recognized Gorman’s skill and strongly urged him to be part of the REU program, which she also co-directed. “It was the first time I got to use math, in a realistic sense, to predict the future,” Gorman explains. “And I don’t mean ‘predict’ things like a prophecy. We use years of data for each algorithm we develop so we can identify how often the algorithm has been right in the past. There is nothing subjective about what we’re doing.” Langville has written a book on this topic and also teaches a course called Operations Research, a component of which explores using mathematical rankings.

Langville’s Who’s #1? The Science of Rating and Ranking.

Like Langville, Gorman is now hooked. “For my career, I really want use ratings to try to predict the future, to give a win probability.” Warren Buffet’s Billion Dollar Bracket Challenge is the perfect opportunity for Gorman to hone his algorithms, hopefully to the tune of $1 billion. Gorman can be reached at gormansm@g.cofc.edu.