Skateboarders protesting restrictions on where they can legally ride have long voiced the adage “Skateboarding is Not a Crime.” 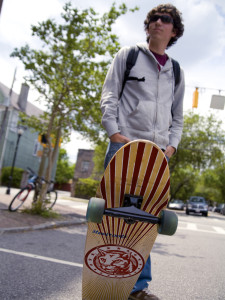 Students at the College of Charleston worked with city officials to craft new skateboard rules.

Following two years of study and debate involving many students from the College of Charleston, skateboarding on certain streets around campus is now permitted. And as long as riders adhere to a list of basic safety rules, skateboarding is not a crime.

The City of Charleston recently adopted the rules after a successful one-year pilot period in which authorities saw improvement in riding behavior and fewer violations.

Robert Reese, Interim Assistant Vice President of Student Affairs and Chief of Police, said the new rules have made a positive difference. “The new regulations are working fine,” Reese said. “The students now have a better knowledge of where skateboarding is allowed and not allowed.”

The regulations have two parts:

The new rules reflect the evolution of skateboards, which boomed in the 1980s as a piece of sporting equipment for jumps and tricks. But today, many skateboarders ride simply to get around.

As the number of skateboarders swelled in recent years, city leaders in 2011 proposed an outright ban on skateboarding throughout most of the Charleston peninsula.

That sparked an outcry from students and student government leaders at the College, who argued that skateboards are a healthy and environmentally friendly mode of transportation. Students began organizing on social media, drafted petitions, and lobbied City Council.

The city responded by forming a committee to study the issue. Led by City Councilmember Mike Seekings, the committee of students, skateboarders, neighborhood leaders, police, and others sought common ground.

“The students were involved from the outset and came with a perspective of experience and needs for the future,” Seekings said. “I have no doubt it was a good experience for them. It certainly was for me.”

Erich Hellstrom, who graduated from the College in 2013 with a degree in political science, was one of several student government leaders who spoke up for skateboarders. He said it became clear as the study moved along that many skateboarders simply wanted the right to use certain streets. 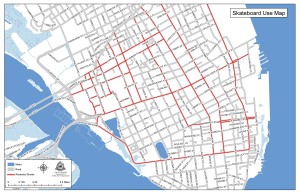 “There are skateboarders who would like to skateboard on every street, and there are those who don’t want to see any skateboarders at all,” Hellstrom said. “So this was definitely a middle ground.”

Opening St. Philip Street to skateboarders was important to gaining buy-in from students. But major thoroughfares such as Calhoun Street, King Street, Coming Street and Market Street are off-limits to skateboarders, under the new rules. Violations can fetch a $50 fine, plus court costs.

Jeri Cabot, Interim Executive Vice President for Student Affairs, said the new rules are a great example of students working within the political system to advocate for a cause. “I am thrilled knowing that students directly voiced their concerns and preferences to city hall and worked with city officials to make productive change.”