A College of Charleston professor, two post-doctoral scholars, a graduate student and alumnus are among the world’s shark experts who presented at the 2014 Sharks International Symposium in Durban, South Africa.

Attendees at the Symposium called Naylor “the George Clooney of #SharkScience” and said his lab’s “online database of chondrichthyans makes fishbase look like an abacus.” 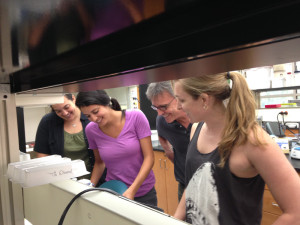 Naylor and Crawford presented “Putting Condrichthans on the Map,” which highlighted the web-accessible database that is an evolutionary tree of sharks and rays. The site includes more than 1,200 species with scientific illustrations, distribution maps, interactive CT scans, and more.

RELATED: Watch a video of Naylor and colleagues talking about the project.

Both Kemper and Corrigan are using next generation DNA sequencing to explore the evolution of sharks. Corrigan presented “Are Disky and Galapagos Sharks Conspecific? A Thousand Genes Indicate Genetic Homogeneity in Spite of Morphological Disparity.” Kemper presented “A Species level Phylogeny of Chimaeroids Estimated from DNA Hybridization Capture and Next Generation Sequencing,” which explores the first comprehensive molecular study that estimates the interrelationships within chimaeroids and their relationships to other jawed vertebrates.

Shiffman, also referred to as Shiffmaster during the Symposium, is a high-profile Ph.D. candidate studying shark feeding ecology and conservation.

He presented “Conservation and Management Policy Preferences of Elasmobranch Researchers.” His research shows that experts and conservation groups are at odds over conservation and management policies. His abstract says, “While many conservation organizations support total bans on shark fishing and the sale of shark products, the overwhelming majority of survey respondents believe that policieis designed to promote sustainable fisheries are ppreferable over banning fishing entirely.”