Ober-Achiever: Freshman is Pitcher of the Year 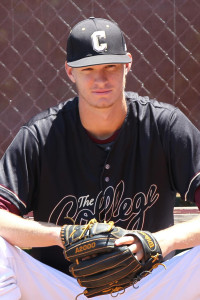 Hailing from Huntersville, N.C., and Charlotte Christian High School, Ober put together a dominant freshman season beginning with a five-inning shutout in relief to defeat then-No. 12 North Carolina on opening day and ending with an eight-inning, one-run performance against No. 10 Texas Tech in the NCAA Super Regional. Ober finished the season with a 10-3 record and a 1.52 ERA, the third-best ERA in College of Charleston history and the lowest earned run average among all NCAA freshmen pitchers in 2014.

RELATED: Read about the Cougars thrilling run to the NCAA Super Regional.

Ober was earlier named CAA Rookie of the Year and CAA Tournament Most Outstanding Player as well as named Freshman All-American by the NCBWA and Collegiate Baseball. He is the College’s first National Freshman Pitcher of the Year. Read more about Ober’s achievements at CofCSports.com.