Grade of Thrones: Monsters in Popular Culture and Academia with Scott Poole 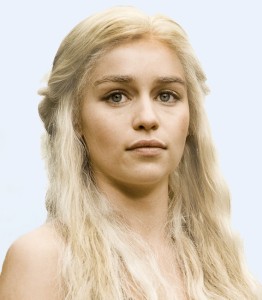 Daenerys Targaryen of Game of Thrones

“I absolutely love it,” Poole said. “I really like the combination of revenge, horror and a little bit of the supernatural thrown in. Daenerys is probably my favorite character and a lot of that has to do with the dragon association.”

The future of horror

But when Poole, who has tied his lifelong captivation with monsters into his scholarship, has to guess about the post-vampire-and-zombie phenomenon, dragons don’t make the cut.

“There’s actually been a notable uptick in interest in the horror genre since 9/11,” Poole observed. “That’s especially true of apocalyptic horror, which includes zombies in a way. I’ve noticed that films that deal with the idea of pandemics and disease have been gaining popularity, obviously by feeding on very real fears from the past decade – everything from terrorists using biological weapons to bird flu and other possibilities for pandemics.”

His other contending theory also involves fears based on current events, like invasion of digital privacy and security. “I could see something like ‘monsters of the digital frontier’ – films essentially about human beings losing themselves and becoming pure data. There’s so much about social media, for example, that seems perfect for horror films.”

Monsters of the analog frontier

Before social media, before online security breeches, the rash of zombie films and TV shows, Sept. 11, and even before Daenerys Targaryen became the mother of dragons, Poole’s interest in monsters was alive – er, undead – and well, manifested in horror entertainment from bygone eras.

“When I was maybe seven- or eight-years old, there was this program that came on TV called Shock Theater. It replayed all the old monster movies from the ‘30s and ‘40s and even some from the ‘50s,” Poole remembers. “The Bride of Frankenstein from 1935 is my favorite if I had to pick. It was a comedy that was a little ahead of its time; it was a very subversive film. There’s just an amazing design to the bride of Frankenstein, she’s this art-deco architectural masterpiece, and as a kid that fascinated me. She’s also one of the first female monsters.”

The actress who portrayed the bride of Frankenstein in the film, Elsa Lanchester, was also one of the first of her kind – an actress unafraid to take on the role of an unusual antihero. She was followed more than two decades later by Poole’s current fascination and the subject of his new book, Vampira.

Poole’s 7th book, called Vampira, is a nonfiction account of the actress (born Malia Syrjäniemi, later Malia Nurmi, then Vampira). It looks into the woman whose gothic persona influenced the countercultural movement of the ‘60s into the LGBT and hardcore punk movements of the coming decades. Poole’s prior book, Monsters in America, details the history of monsters in the U.S. And how each form of horror relates to cultural influences, social change and historical events. Alternatively, Vampira centers around a cultural phenomenon in and of itself.

Vampira, with her affinity for equally dark entertainment and creative outlets, personified the glamorous monsters popular in the ‘50s and ‘60s. Since her reign, however, the term “monster” has evolved to the point that it might even include some of the human characters on today’s fantasied TV shows, like Game of Thrones, a show dominated by strong female characters.

Beasts in the classroom

Poole has the opportunity to cover monsters of the Vampira and Game of Thrones varieties in a graduate course about American horror narratives. In his fall 2014 general education history course, a survey of the ancient world focusing on monsters and villains, Poole will teach students about the mythological beginnings of the horror tradition, and he just might foster a new passion for it among his students.