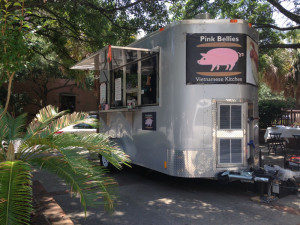 You know that food truck you walk by every day at the corner of Calhoun and St. Philip Streets? It’s the brainchild of College of Charleston alumnus Thai Phi.

He’s doing pretty well – in fact, Pink Bellies was just named one of the 22 Hottest Food Trucks Across the U.S. by Eater (he’s No. 13). Phi serves what he calls “Vietnamese deliciousness” – a variety of pho, banh mi sandwiches, and traditional drinks.

Getting the Business Background

It all started in 2012, when Phi graduated from the College’s one-year MBA program. The program helped him realize the corporate world wasn’t for him, but gave him the business background he needed to launch a food truck. Less than one year later, in September 2013, Pink Bellies was a reality.

“The hardest part was being consistent,” Phi says. “Our very first location was Glebe Street and there were days where we didn’t do much business. It was hard to come back after one of those days and do it again.”

It took him seven months to land the prime spot at the corner of Calhoun and St. Philip Streets and business has been booming ever since.

Back to His Roots 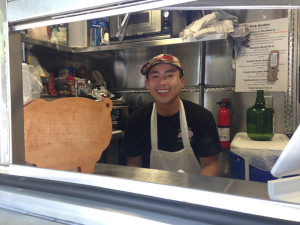 The concept for Pink Bellies comes from Phi’s heritage – he is Vietnamese and is committed to raising awareness about the culture. His menu rotates every week or so, based on available ingredients, but nearly every dish is pork-based. He’s received rave reviews for the blueberry pulled pork banh mi made with blueberry jam, pulled pork, jalapenos, pickled carrots, red onions, and cilantro.

“In the summer, the menu usually has noodles and salad, but in the winter, I’ll focus more on soups,” Phi says.

Everyone you see in the food truck has a College of Charleston connection. Phi hires students who have a passion for food, then absorbs them in Vietnamese culture. He’s had international business and hospitality and tourism management majors work for him.

There’s a lot of interest in food trucks right now, especially with “Chef the Film” currently in theatres. The film stars John Favreau, Dustin Hoffman, Sofia Vergara and John Leguizamo and chronicles a chef who leaves a restaurant and starts a food truck.