3 Tales of College of Charleston Ghosts 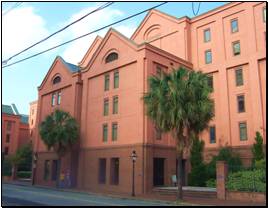 Joe E. Berry Residence Hall was built on the site of the old Charleston Orphanage House. According to records, its infirmary was overflowing with sick children during the Spanish influenza pandemic of 1918. The children who were not sick were sent outside play in the yard. One day, a couple of children playing outside found some oily rags and started a fire on the orphanage grounds. The fire quickly spread, causing the evacuation of the building. Four orphans died of smoke inhalation. Fast-forward to 1991, when the College of Charleston opened the doors of Berry Residence Hall. Not long after students moved in, the hall was plagued by a rash of false fire alarms. Students then reported hearing distant voices and laughter of children late into the night. Some students also said that they were awakened by the sound of marbles cascading across the floor, only to find none. Perhaps the strangest thing is that some students reported they have heard the voices of children chanting “Ring Around the Rosie” in the early morning hours. 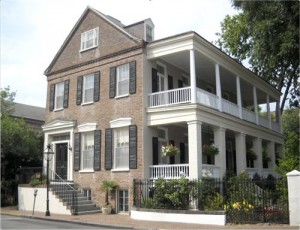 The College purchased the house located at 12 Glebe Street in 1966. When workers entered the building, they discovered that the previous occupants had created confusing mazes through the house. They sealed up rooms, staircases and other locations that eventually turned the 15-room house into a single unit. After workers restored the house, it was used as a guesthouse. One night, two people in the house were in bed reading books when they heard a noise at the foot of the bed. They both looked up and saw a ghost described as ”6-feet-tall, well-dressed wearing a fluffy tie.” The ghost moved his mouth in an effort to speak, but no sound came out of his mouth. The ghost looked frustrated and soon left the room through a solid plaster wall. People believe that the previous owners constructed the maze to keep the ghost out of their room. 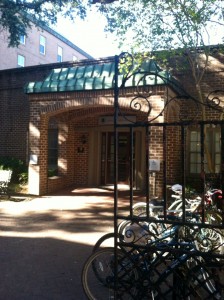 The building was once the site of Brauer’s bicycle shop. The shop closed in 1971 when Mrs. Brauer was murdered there after a botched robbery attempt. The College bought the building and turned it into the college bookstore. One day before the start of a semester, the staff worked all day shelving textbooks to sell to students. The next day, the first staffer to unlock the door discovered all of the books had been taken off the shelves and placed neatly in stacks on the floor. Some of the stacks were as high as five feet tall. Nobody knows why or how this occurred.