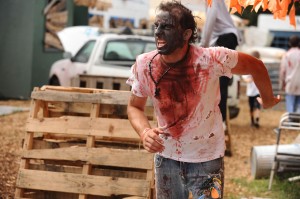 If there’s anything TV shows like The Walking Dead and films like Zombieland and Dawn of the Dead have showed us, it’s that hopping in your car and driving away from zombies is not a long-term plan. This is because, College of Charleston Urban Studies Program Director Kevin Keenan said, “Roads will be impassable with stalled cars and dead drivers, so driving a car will probably be useless for escape purposes.” In time for Halloween, Keenan, whose evacuation plan for a real emergency would look very different, used his urban studies and transportation expertise (along with zombie knowledge gleaned from movies and TV shows) to offer tips on how to plan a successful escape.

1. Consider what kind of zombies you’re dealing with.

A comprehensive zombie attack plan would include a different response for the recently conceptualized fast-moving, “smart” and alert zombies that I’ve been hearing about as well as the usual sluggish, dumb zombies that respond slowly only when they see or hear someone moving about. It would also take into account whether or not the attack was sudden with no prior knowledge, or if the government knew the attack was coming and was able to give an evacuation order.

Whether the zombies are fast- or slow-moving, my recommendation would be to shelter in place. This means holing up in your home, and using tables and other furniture to barricade doors and windows if possible.  I wouldn’t recommend getting in the car and driving away, as the roads will likely be impassable with car accidents, traffics, and possibly roaming zombies.

Of course, if you are sheltering in place, that means you’d have to have enough food and water to last you for a long time, as well as daily medications you take and diapers and formula for children if you have them.  You’ll also need pet food stockpiled, provided you’re planning to protect man’s best friend from the zombies along with your family. (By the way, storing non-perishable food and water, along with medications, pet food, and children’s necessities, is good practice anyway.)

If zombies get into the house, try to fight them off. If you sense you’re losing ground, try to make a run for it.

Have a bicycle ready, as you’ll be hard pressed to out run the fast-moving zombies and driving a car is a nonstarter.  In general, it’s good to have bicycles available, as even in real life emergencies, gasoline may be quickly depleted (as occurred in New York City after Hurricane Sandy) and roads and bridges may be inoperable due to destruction of many stopped vehicles.

If the attack is imminent or occurring and you can’t shelter in place, I’d think your safest bet would be to get a bike and ride out on one of the back roads. I wouldn’t use the major highways because it is difficult to get off of them in the event you see an approaching zombie mob (exit ramps are miles apart), and it’s quite possible you’ll get a mile or two and then hit a blockade from an accident or stalled vehicle.

In all of the scenarios listed above, I’d recommend buying and storing zombie costumes along with your non-perishable food items and medications. In the zombie films I’ve seen, it seems the zombies can’t smell humans, but rather they see humans moving about alertly and then attack.

Why not dress up with tattered clothes, put on some blood oozing make up and corroded flesh, and do the “zombie walk” among real zombies. Perhaps they would never know it’s really you, a person who is alive, and you’d able to escape unnoticed.  This strategy, however, would mean you’d have to stay away from other humans, as they will likely try to kill you for being an attack zombie.

I think people should always listen to the advice of authorities, including regarding times and routes for evacuation. Disasters are always context-specific, so it is imperative to listen to people who have a “macro view” and knowledge of the city or region. These authorities will know which routes are still available, and which ones are blocked or will lead you into harm’s way.

If authorities are not available, then you need to have a shelter-in-place plan. I wouldn’t leave my home until I absolutely could not stay.

Hopefully, the zombies will pass through Charleston relatively quickly (unless they, too, have read Condé Nast Traveler’s recommendations and fall in love with our little city), and provided the zombies haven’t brought on an apocalypse, government authorities will be able to eventually get the attack under control.

Be prepared. In real-life evacuations, people need to listen to authorities and evacuate when told to do so and by the recommended routes.  It is also advisable to have a “go-kit” ready that contains important resources, such as daily medications, food, water, cash, and identity documents (e.g., driver’s license and the deed to your home for re-admission to the area after the emergency.)

People should also have a shelter-in-place plan for the possible scenario of being stuck at home for the duration of the emergency. Additionally, it is always advisable to have a meeting place and communication plan identified before an emergency, so that you can get in touch with family and friends once the emergency is over or your evacuation is complete.

Keenan, who became the Urban Studies Program Director in 2013, attended the State University of New York at Stony Brook for his undergraduate degrees in political science and philosophy, and his masters in public policy. He received his masters in geography from Hunter College, City University of New York and his doctorate in geography from Clark University. He also directs the College’s graduate Urban and Regional Planning Certificate Program. The Urban Studies Program debuted a course called Sustainable Urbanism during the fall 2014 semester. Taught by an urban planning professional, it examines the role of urban planning and design in fostering sustainability. In fall 2015, the Program will launch a course in International Urbanization and in spring 2015, an event on Military Base Planning, which will introduce students to civilian careers in military base design – a field with significant job opportunities. The Urban Studies Program is offering this programming around the College-wide theme of militarization, as reflected in the College Reads! book choice