You’ve got to respect seaweed. As its name suggests, the stuff is remarkably hardy and pervasive, happy to live on rocky ocean bottoms, within tidal pools or even untethered, traveling through the ocean like aquatic tumbleweeds. Some seaweeds are so resilient, says marine biology professor Erik Sotka, that you could place them 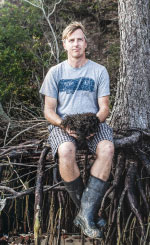 atop a damp cloth and refrigerate them for nine months and still expect them to grow when they are reintroduced to light.

Yet there are a few places where seaweed, which is actually an algae, has not been able to grow very well, and that includes the coast of South Carolina. Sediment-heavy tidal estuaries and the absence of rocky shores have historically prevented too much seaweed from taking hold in the Palmetto State. In the last 10 years, however, things have changed. If you glance across the mud flats at low tide, there’s a good chance you’ll see lots of a type of red seaweed called Gracilaria vermiculophylla.

This seaweed, originally from Japan, has teamed up with the decorator worm to make a new home in the mud flats off the southeastern United States. The worm, which lives in tubes buried a foot or two into the mud, glues the base of the seaweed to its tube opening, allowing the seaweed a sunny toehold in the tidal marsh. In exchange, the seaweed provides a habitat for small marine animals that the worm, and other organisms, can farm for food.

Sotka and his students at the College’s Grice Marine Lab have been studying this arrangement, trying to determine the consequences of the arrival of this invasive species. Answers, however, are not easy to come by.

“The seaweed is increasing the amount of food available in the ecosystem, but there are impacts on the cycling of nutrients in estuaries and on algal blooms,” says Sotka. “We’re also worried we’re going to smother the mudflats.”

To mitigate the seaweed’s effects, Sotka has been exploring the idea of harvesting the seaweed for use as a fertilizer or for biomedical applications. More research is needed, however, before he can render a verdict regarding the seaweed’s presence in South Carolina.

“With any invasive,” he smiles, “it’s complicated.”

And you have to respect that.