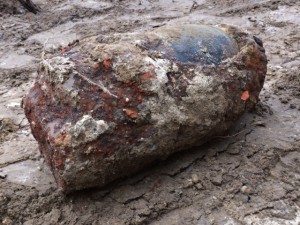 Living history isn’t just a slogan at the College of Charleston. It’s true. Today construction workers unearthed a Civil War-era artillery shell that is believed to have been there for more than a century. The shell, which is about a foot long, was removed by the Department of Defense. The area where the shell was found is part of the expansion of the Sylvia Vlosky Yaschik Jewish Studies Center, which includes a new vegan/kosher cafeteria. The expansion is expected to be complete in winter 2015.

“It is quite common to find Civil War artifacts on the peninsula, not always as spectacular as an unexploded shell, though they are found every once in a while,” explains archaeology professor Barbara Borg. “From time to time battalions of soldiers came through and camped in large numbers, so it is common to find horse hardware, ceramics, cookware, buttons and buckles from clothing, pewter silverware and, where preservation is really good, items made out of wood, like drumsticks and the wooden parts of brushes.”

WEBSITE: College of Charleston is home to S.C.’s only undergraduate major in archaeology.

Borg has directed the College’s Archaeological Field School for a number of years and says they have often worked on the peninsula finding many of these artifacts. “Charleston and the Lowcountry are archaeological jewels,” says Jim Newhard, classics professor and director of the archaeology program. “I would hazard to guess that there are few places with richer archaeological heritage in the country than Charleston. Therefore we have a tremendous duty as stewards of this national treasure, to take the necessary precautions to ensure its survival.” Newhard advocates for a city archaeologist, tasked with preserving these finds. He also notes that while the Civil War and Colonial phases receive a lot of attention, the plantations up and down the Ashley and Cooper Rivers are a part of a broader story that includes American Indian habitation prior to the arrival of Europeans and Africans through to transformations in society in the decades following the Civil War.