Other than, possibly, farmers, Mike Larsen might be the only person in Charleston who cheers when it rains. That may be putting it too strongly, but Larsen does admit he tends to get “less depressed” than the average person during wet weather. That’s because, for Larsen, precipitation means progress, and that makes him happy.

“It may be raining,” the physics professor says, “but I’m getting data.”

Larsen says this while standing in a field at the College’s Dixie Plantation, located about 17 miles southwest of Charleston on the Stono River. Surrounding him are nearly two dozen pole-mounted instruments that monitor rainfall using infrared light. Also in the field is a 2D video disdrometer – a device that takes up to 55,000 pictures per second of falling raindrops. With these instruments, Larsen is able to measure and take pictures of millions of raindrops, determining each drop’s size, shape and speed. Computers in a nearby cottage record all this information.

In 2009, scientists discovered a new and confounding fact about small raindrops: They can travel at speeds thought impossibly high. Many small raindrops, it was observed, exceeded their terminal velocity, or the speed at which air resistance offsets a falling raindrop’s acceleration due to the pull of gravity. Struggling to find an answer for this, some scientists hypothesized that large raindrops collided with the edges of the scientific instruments being used to monitor rain. Upon impact, the large raindrop shattered into smaller ones, some of which initially retained a speed close to that of the larger raindrop.

Larsen and his team of undergraduate researchers investigated this particular phenomenon on their own, confirming that smaller raindrops do indeed often fall faster than expected. But in an interesting twist, Larsen discovered that small raindrops could travel at such speeds even without colliding into an instrument and shattering. Essentially, he discovered that small raindrops can achieve super-terminal speeds on their own, though it is still not yet clear as to how they do that naturally.

Larsen has his theories, however, and they revolve around how raindrops combine or fall apart during a midair collision: “We think we have the tools to find out for sure. It’s just going to take some digging.”

But Larsen, whose research was highlighted in Science Magazine last August, wants to do even more than confirm and figure out raindrops’ super-terminal speeds. Larsen also wants his research to better explain rainfall at the hyperlocal level. Modern weather radar, he explains, has its limits, especially the farther you are from the radar dish. According to radar information, you might be told that it’s raining uniformly in downtown Charleston. But human experience tells us that while it may be drizzling in the Cistern Yard, a heavier rain may be falling just a block away.

By measuring rainfall across a football field–sized area at Dixie Plantation, Larsen hopes to better understand the dynamics of rainfall in a defined space and time. 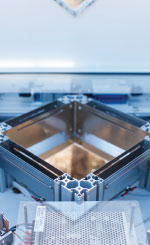 Larsen has investigated local rainfall before, but his prior experimentation was decidedly less high-tech. At his previous teaching position in Nebraska, Larsen placed a number of buckets atop a roof and let them collect rain. When he revisited the buckets some time later, he observed water levels that varied as much as 25 percent. When Larsen arrived at the College in 2010, he decided to take the experiment to the next level, installing his many precipitation monitors. The result, he says, is Dixie Plantation being able to lay claim to “the densest set of rain disdrometers in the world.”

“We are really focusing on how much rain can vary in one radar pixel,” says Larsen.

Joining Larsen in this pursuit are a loyal band of physics students, including senior Robert Lemasters and juniors Kate O’Dell and Joshua Teves. These three thought they were signing up for rain research, but then found themselves at Dixie in brutally hot and sunny July weather digging holes, hauling and pouring cement and installing poles on which to affix instruments.

“It was gnarly,” says Lemasters, “but it was really fun to see it happen.”

Less fun were the black widow spiders they occasionally discovered making nests around the instruments. So far, however, no spider bite has been recorded at Dixie, just a lot of raindrops.

Despite toiling in fields in the summertime, dangerous insects and damp working conditions, the physics majors have nothing but praise for their professor. All three students commend Larsen for not only doing impressive research, but for also being an enthusiastic and passionate teacher. It is not unusual, they say, for Larsen to start sputtering in class and rolling his head wildly as he talks.

“He gets so damn excited,” says Lemasters, comparing Larsen to a kid on Christmas morning.

O’Dell adds, “He wants you to love what he’s teaching. I don’t know how he gets all this stuff done.”

The students also agree on one other thing: There’s a lot more than meets the eye when it comes to rain.