Student Fashion Blogger Had the Best Spring Break Ever 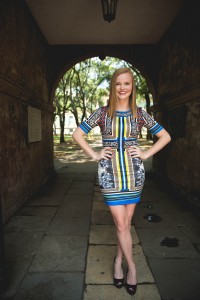 Sophomore communication major Taylor Brobisky started her fashion blog in January 2014. The blog, Holy City in Heels, celebrates Brobisky’s personal style, the natural beauty of Charleston and the city’s growing fashion scene. And in March 2015, it got her on national television.

Well, that and her mom.

“It was our last day in New York and I was like, ‘I don’t want to do this!’ It was 6:30 a.m. and we were so exhausted. But my mom was like, ‘no, you’ve come all this way, we need to go to the TODAY Show,’” the College of Charleston student said. So they did. Brobisky and her mom travelled to Rockefeller Center with a poster (penned in lipstick) advertising Holy City in Heels.

She had hoped to be a part of the screaming crowd, to watch her favorite hosts film a live show, and maybe to flash her poster at a camera. But Brobisky got much more.

“This producer approached me and asked, ‘Do you want to play a game with Kathie Lee and Hoda?’ and I was like, ‘YEAH!’” 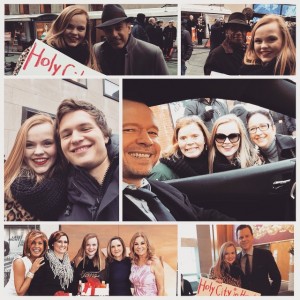 Brobisky’s collage from her time on TODAY.

Brobisky appeared on the TODAY Show with both hosts and two celebrity guests. “It was fun! I got to meet Ansel Elgort and Jeremy Sisto. It was a really nice surprise,” she said.

Her segment on the show is not the first opportunity that’s arisen, however circuitously, through Holy City in Heels. Brobisky’s been photographed for several professional shoots, hosted events at local boutiques, served as a campus ambassador for Charleston Street Style, secured an internship with Charleston-based bow tie company Social Primer and she collaborated with Bonobos.

“My blog brings on a lot of collaboration opportunities,” Brobisky explained. “For example, I got the internship with Social Primer through my blog – I got a t-shirt from the guy who runs the company and I wrote a post about it and sent him the link along with my resume. He was like, ‘Yeah, come on board!’”

“I think my blog gives insight beyond my resume, it brings my personal style and my writing abilities to the table too,” she continued. 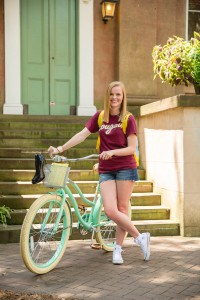 Although she loves fashion, Brobisky hopes to focus on the communications and social media side of the industry after she graduates. In the meantime, Holy City in Heels showcases her self-described girly and eclectic style. “It’s also a little bohemian and a little preppy, so really a little bit of everything,” she said.

The blog has gained exponentially in popularity since her first post a little more than a year ago. The keys to her success, Brobisky reflected, are frequent updates (“I try to post at least twice a week”), a well-maintained Instagram account (@HolyCityInHeels) and a little help from her friends (she was one of the first members of the Charleston Blogger Society). “It makes the city seem smaller,” Brobisky said of the connections she’s made through blogging.

Whether those connections propel her to the forefront of Charleston’s burgeoning fashion industry or to that of another city remains to be seen, but Brobisky knows one thing for certain. “I have a real passion for this. I love everything fashion related, and I know this is what I want to do longterm.”