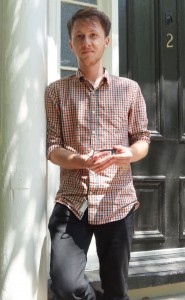 Senior Ben Widder was participating in an archaeological field school at Dixie Plantation when he discovered a key dating to the early 1700s.

Some archaeologists dig for years before unearthing a significant artifact.

But College of Charleston student Ben Widder had a bit of beginner’s luck during an archaeology dig last year at the College’s Dixie Plantation, located along the Stono River near Hollywood, S.C.

The senior anthropology major and archaeology minor was participating in his first archaeological field school when he unearthed a key dating to the early 1700s.

“I was using my trowel and I heard the clink of metal hitting metal,” recalls Widder. “I scraped around it pretty quickly when the ring of the key became exposed, and seconds later the tip of the trowel lifted the ring up, exposing the rest of the key.”

“I found a key!” Widder shouted, as his classmates and professor came running.

Maureen Hays, professor of anthropology and associate dean of the School of Humanities and Social Sciences, says the key was probably made before 1707 when a parsonage house for Saint Paul’s Church was constructed on the property. American Indian groups burned the parsonage during the Yamasee War (1715-1717).

“I believe this is a rare find,” says Hays, who is co-director of the archaeological field school along with Kim Pyszka ’92, an assistant professor of anthropology at Auburn University at Montgomery. 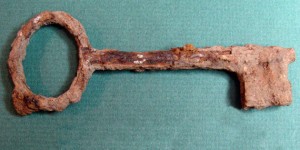 The key before it was restored by the Charleston Museum.

Occupied for thousands of years, the site of what is now Dixie Plantation is historically, archaeologically and ecologically significant. The 881-acre property was bequeathed to the College of Charleston Foundation in 1995 by the late conservationist, ornithologist, and artist John Henry Dick.

In recent years, archaeologists digging at Dixie have discovered hundreds of artifacts, including ceramic sherds, tobacco pipe stems and a Spanish coin.

Archeologists have also located the foundation of the old parsonage house. And now, thanks to Widder’s discovery, they have a key associated with the parsonage.

But finding the key was only the first step. The ferrous artifact was heavily oxidized and required months of careful restoration at the hands of archaeologists from the Charleston Museum. 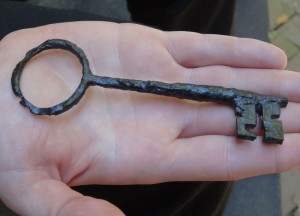 The key after restoration using electrolysis.

Ron Anthony, one of the museum archaeologists who restored the key using electrolysis, has been teaching at the College as an adjunct professor since 1990.

“It’s a process whereby chlorides locked within the artifact are purged from the artifact via electricity or chemical means,” explains Anthony. “This is a common, safe way to conserve any metal artifact which oxidizes.”

As for Widder, he was just happy to be the one to make the discovery. “If it wasn’t me, it would have been someone else. I just happened to be assigned to that spot.”