When it comes to warning people about the risks associated with hurricane storm surge, Lee Lindner is himself like a powerful weather event: he doesn’t pull any punches. 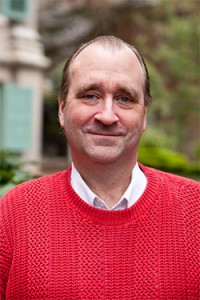 Lee Lindner, associate professor of atmospheric physics, teamed with the National Weather Service and his students to develop a storm surge visualization simulator.

An associate professor of atmospheric physics at the College of Charleston for more than 20 years, Lindner notes the rapid pace of residential development in low-lying areas in and around Charleston. He’s concerned that many residents are blissfully unprepared for the worst of what Mother Nature could unleash.

That’s why Lindner has teamed with the National Weather Service and his students to develop and refine a storm surge visualization simulator to illustrate the severity of a storm surge in different hurricane scenarios.

The computer model was made available to the public earlier this year to gather feedback on how it can be improved for wider use as a public education tool. Earlier this summer, Lindner attended a conference of the American Meteorological Society where he presented the model as well as some of the results of the public survey he conducted.

With hurricane season underway, and the most active period yet to come, The College Today asked Lindner to share his insights about hurricane storm surge and the Charleston peninsula’s notorious flooding issues.

Q: Why is flooding in downtown Charleston sometimes so severe?

A: Obviously, it’s the low elevation. And the drainage is an issue, particularly when high tide occurs, and particularly if it’s an astronomical high tide – when the lunar tides and the solar tides combine.

An astronomical high tide is going to be the worst. At that point the water is going to be very high anyway, so if you get a bunch of rain it’s got nowhere to go. The tide goes up and down about seven feet. If it’s really high, you might only have a foot or so between the storm drain and the ocean. You are not going to get a whole lot of drainage in that case.

We know when those are coming, so it makes it easy to forecast when there is going to be tidal flooding downtown. With flash flooding, however, those thunderstorms are so random that they can pop up almost anywhere. That makes it very difficult to figure out exactly where the flooding is going to occur. 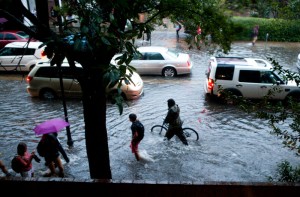 Flooding is a fact of life in Charleston, especially in afternoons during the summer. Keep a good set of rain gear close – boots, jacket and umbrella. Or just pretend you’re in Venice.

Q: What about hurricane-related flooding?

A: Downtown Charleston has had flooding up to the second floor of buildings. That’s actually happened several times in our history in the 1700s and 1800s. The 1893 hurricane was very bad. There was a town near Beaufort and Hilton Head that was literally wiped off the map. Charleston had effects from that as well. That’s part of the reason that our cities were built more inland – because they kept getting wiped off the map. After a while you learn: don’t build your cities out there.

If Hurricane Hugo (in 1989) had made landfall 30 miles further south, we would have easily had an extra 10 feet of surge, and the damage would have been an order of magnitude higher.

All you have to do is look at Katrina, look at Mississippi. You will see pictures of trees with their bark stripped off the tree up to 30 feet high. It’s coming. It’s not a question of if; it’s a question of when. 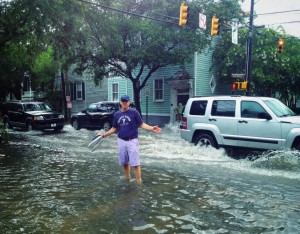 Q: Are we due for another major hurricane to hit Charleston?

A: If you look at the past 100 years, every five years on average we’ve been hit by a hurricane. But we haven’t been hit in over a decade. That, of course, doesn’t mean we are overdue, but I’m just saying it’s a matter of time before we get hit.

Eventually, you’ll get hit, but because of the statistics your chances of getting hit in any particular year are so small. So a lot of people take the chance and they buy insurance.

Q: If you had a magic wand, unlimited resources and time, what would you do to better protect Charleston from hurricane storm surge?

A: There are a variety of things you can do. Probably the worst hurricane ever hit Galveston back in 1900. After they got hit again a few years later, they built a seawall. You could build a seawall in Charleston, but you lose all your views when you do that. If you have a beach house, you don’t want to look at a wall, you want to look at the ocean. I would say it’s not practical for political reasons.

Another thing you can do here is to move people inland.

Check out this historical hurricane data for Charleston from the National Weather Service.

Q: How does the hurricane storm surge model work? 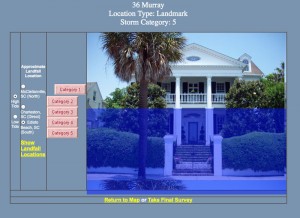 LIndner’s storm surge model uses side view images of properties to illustrate how much water would be present in different storm surge scenarios.

A: Often the way storm surge is depicted is with a flood zone map. The problem is most people have difficulty interpreting that map. So instead of showing a view from above, we show a view from the side with a line showing the water that would be present in that scenario.

What we are trying to do is give people a better understanding of what their risk is, teaching them the physics but doing it on a very simple level.

Q: What’s the status of the model?

A: We built the model over the past five years. We’ve probably had more than 50 undergraduate students involved over the years. About half of them were physics majors and the rest were from other majors interested in meteorology, including students from our meteorology minor.

We are analyzing about 600 public surveys and trying to get a sense of what works and what doesn’t. One of the questions we asked was, “if you had used the model before you moved into your current house, would you still move there today?” More than 25 percent responded that they would have more seriously considered other homes.

Our plan is to apply for grants to improve the model based on the survey feedback. The model is offline now because it requires some training and context to use.

Hopefully it’ll be many years before we experience another severe storm. However, it is always better to be knowledgeable of the risks you face.