Interview with a Vampire Expert 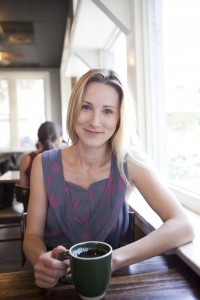 One of the many new faculty joining the College of Charleston this fall is Irina Erman, a scholar of modern Russian literature and culture. Erman has taught for the past three years at Davidson College, but this fall she will be teaching a Russian Literature in Translation course on vampires (LTRS 250) in the College’s Department of German and Russian Studies. Get a sneak preview of her expert vampire knowledge in this Q&A!

Q: How did you become interested in vampires as a topic, and why do you think that vampires are such a popular phenomenon in global culture?

A: The evolution of vampire imagery and the explosion of their popularity over the past decade tell us a lot about our culture – and I’m not just talking about Twilight here. (Vampires aren’t normally sparkly.)

For the most part, authors have deployed vampire imagery in a negative way. My own interest was piqued when I saw a photoshopped image of the Russian president Vladimir Putin as Vlad Dracula. This was right around the time when the conflict in the Ukraine was heating up and I noticed that journalists started referring to Vladimir Putin as Vlad instead of the polite form, Vladimir. This association between Putin and Dracula portrays the Russian president as a menacing and alien figure, so different that he may be beyond understanding. I work on alterity, and this episode with Putin made me realize that vampires are a great metaphor to consider in analyzing how we portray those whom we consider to be different, or “other.”

I think vampires are so popular today because we’ve never lived in a media landscape that is quite so effective at exposing us to so many different cultures and views. And vampires, which are simultaneously dangerous and fascinating, help to capture both the trepidation and the sense of excitement we feel for the unknown. 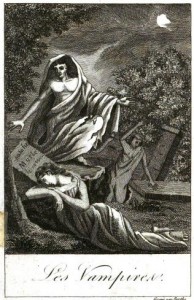 The artist Berthe’s illustration of a vampire, published in 1820.

Q: What will students learn from exploring Russian and European narratives about vampires and the undead?

A: I think vampires teach us a lot about ourselves. There is a famous scene in Bram Stoker’s Dracula in which a character, Jonathan Harker, is shaving in front of a looking glass and Dracula is standing right behind him. But Jonathan can’t see the count’s reflection in the mirror. This scene is quite emblematic – vampires don’t have reflections because they are really reflections of us (to be more precise, they reflect our anxieties and desires). This is why they can be either menacing or ‘sparkly’ depending on the context and the desires of the audience.

In my literature class we will study the figure of the vampire as a metaphor for those whom society deems to be “other” in terms of race, sexuality, religion or nationality. In analyzing what vampires can tell us about the ways societies deal with differences, we will think about ethical modes of interaction with others.

Q: You are not only a new assistant professor of Russian at the College, but you’re also the program director of Russian studies. Why should students study Russian?

A: Russian opens a world of opportunities, both by giving students access to a rich and beautiful culture and by equipping them with language skills that will make them stand out on the global job market. Both despite and because of the unfortunate strain in current Russo-American relations, studying Russian is more important than ever.

We can talk about the immediate geopolitical causes of this strain but, at its heart, it is about a lack of understanding. In order to work in international security, politics, or business you have to understand where the people you are dealing with are coming from. And this is why studying foreign languages and cultures, and particularly Russian, is so vital today.

A: I was incredibly impressed by the caliber of the students I met during my interview visit to the College and my colleagues in the Department of German and Russian Studies made me feel immediately welcome. After that visit, I just knew I couldn’t possibly accept another offer.

This is my first summer in Charleston and I love it. Don’t let the extreme (some may say vampiric) paleness fool you – I’m actually a bit of a beach bum, so between library runs I’ve also been spending time at the beach with my hound Sherlock who has recently discovered his passion for chasing seagulls.