Tiny is huge right now. In fact, there’s a whole movement of people looking to minimize their spaces in order to maximize their lives. For one alumna, she discovered firsthand that big things can come in small packages.
by Maura Hogan ’87 I landed a spot on national television for the smallest thing I have ever done. How small was it? To be exact, it was 578 square feet, the entire footprint of my pint-sized new Charleston house.
Yes, my husband, Scott, and I have embraced the current craze for diminutive domiciles, and have set out, along with our toddler daughter, to find out if less is really more. And, we have done so in downtown Charleston, a locale known for grand Southern gestures rather than the likes of our tiny Tara. What’s more, our pursuit of a downsized dream home captured the attention of the creators of Tiny House Hunting, FYI Network’s popular show that showcases small space residences across the country.
First, a bit of backstory. In 2013, we relocated with our young daughter to Charleston from New York City, where I had lived and worked since graduating from the College in 1987. I quickly discovered that peninsular living was an altogether different proposition than it had been in my childhood days. Back then, I called home an 8,500-square-foot antebellum manse on Legare Street. But Charleston has changed. I doubt the earthquake bolts that reinforce old Charleston houses can stand up to the seismic shift in property values here. So we opted instead to apply our citified savvy with constrained spaces to our quest for a new home that would give us flexibility to build later or keep as a pied-a-terre. After the producers of Tiny House Hunting caught wind of our plan, they cajoled us into signing on for season two. Why did we do it? First, we were assured that the show’s ethos eschews the “bad behavior” approach of some reality TV shows. While I am happy to show off my new home, I am not up for airing my dirty laundry. After viewing some past episodes, Scott and I concurred that the show zoomed in more on creative solutions for small footprints than on personal shenanigans.
Then there was my school pride. Not only am I an alumna, I’m also a member of the College’s marketing team. The chance to show off our famously beautiful campus on air was catnip for this Cougar, and I agreed, assured by the producers that they would consider filming my backstory on campus. So what is the reality of reality TV? It is not for those short on stamina. At the crack of 7 a.m. on the first morning of filming, the director rapped on our front door, a tad earlier than expected. A groggy, crumpled me greeted him, toting my diaper-clad, wary daughter. She immediately erupted into tragic wailing at the presence of this strange man in black jeans barreling into her home before her morning bottle. Pandemonium ensued. 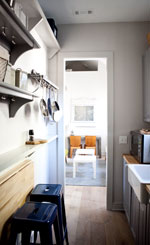 Within minutes, a veritable SWAT team of crewmembers descended on our modest living room, piling in a black mass of cameras, microphones and other intimidating apparati, which soon laid claim to every counter top and outlet available. One by one, the team sized up our humble home like the Terminator, mumbling concern over tight angles, electrical access, unforgiving light. For four straight days, four takes at a time, we blazed through three petite properties, the College and a few favorite local spots (including D’Allesandro’s Pizza, owned by Ben D’Allesandro ’05). We drove on backstreets and out-of-the-way places in our Jetta, rigged up with Go-Pro cameras and a Walkie Talkie that shouted commands and fed us suggestions from the crew, as we hashed out, sized up and squared off. We also stole moments between takes to check our teeth in mirrors, text the nanny and come up with new on-camera sound bites. With each insistent clap of “action!” Scott and I nosed our way through cabinets; poked into closets; critiqued kitchen counter space; quipped about décor; and marveled over modern ingenuity. Take Two: We did it again, this time with less starch. Take Three: We took it back to the beginning, this time traveling first to the couch, then to the dining table, like we were supposed to (consistency is key, we quickly found out). Take Four: We started from square one after an uninvited truck engine botched Take Three. There were artistic differences. In other words, I kept forgetting I wasn’t the director. There were happy accidents. Our real estate agent, Vikki Matsis ’07, turned out to be a Cougar, too. There were awkward moments. Who knew a teeming wake would spill onto our new street fresh from a funeral at the very time of the filming of the joyous “reveal” scene toasting our new home? There were also the on-screen marital dynamics. During filming, Scott kept extolling the praises of “The Bungalow,” the tricked-out hipster pad on Folly Beach. I was firmly fixed on “The Traditional,” with its classic Charleston cottage charm. This, of course, was greatly encouraged by the director, who was frantically mining for dramatic tension in our wholly civilized marriage. Regardless of this quasi-conflict, I amped up my perk factor take after take. After all, I was intent on securing my status as a paragon of marital grace. At the same time, my reserved husband surprised me with his own self-characterization, tapping his public relations background to deliver countless made-for- television bon mots and zippy one-liners.
There were many revelations on the reality of show business. Hollywood glamour was all but missing on the set: no makeup artists or artisanal sparkling water. However, in its place was heart and humor, more than I would have thought possible with the minute-by-minute production stressors. The scrappy, stalwart crew remained agreeable and upbeat through rain-soaked retakes, location gaffes and even unsolicited suggestions from the cast (that would be me). 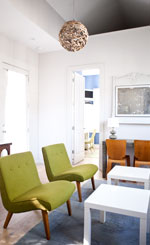 On gaspingly tight budgets and even tighter timelines, the crew punched through a shot list, cramming into corners and peering from closets to get the right footage. Our gentle-natured director of photography kept our nerves calm and energy up long after my face had fallen. Our director somehow managed to coax a host of TV moments from rank amateurs like us. His goofy candor made it impossible to take offense, even when his “notes” were less than flattering. By the time we wrapped, we were utterly exhausted, but curiously energized. For four days, we had to think on our feet, shoot from the hip, speak in a strange new language, and then do the same three times over again. It was a cognitive boot camp that gave me a deeper understanding of the rare talents it takes to make a 20-minute show. A few months later, with one eye shut, we viewed our episode. It was then that I came to also appreciate the evil genius of the television editor. For all my cheerleading, the editor had still somehow extracted a handful of “Debbie Downer” lines. I felt like I came across as the wet blanket of the couple, with my long list of “concerns.” In the parlance of the industry, I had been given the “villain edit.” Conversely, my self-avowed curmudgeon of a husband somehow was made to look like the eternal optimist of the two, daily battling my naysaying with dogged glee. I didn’t really mind in the least. It was even curiously freeing to have my well-spun pleasantries left on the cutting room floor. More importantly, the College made it into the cut as the stunning, inspired spot where I earned my degree and where I now call “the office.” So that was my reality as a one-time reality TV star. And that’s a wrap.

– Maura Hogan ’87, who enjoyed a writing/marketing career with The New York Times, The New Yorker and Time Inc., among others, is the College’s director of advancement communications in the Division of Marketing and Communications.