Republican presidential candidate U.S. Senator Ted Cruz will participate in two meetings with faculty, staff, students and the community as part of the College of Charleston’s Bully Pulpit Series on Nov. 16, 2015. 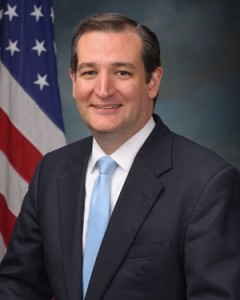 Cruz will hold a private roundtable discussion with campus and community leaders from 3:15 p.m. to 4:15 p.m. followed by a public town meeting from 4:30 p.m. to 5:30 p.m. in the Stern Center Gardens (located behind the Stern Center, 71 George St.) The town meeting is free and open to the public.

Cruz was elected to the United States Senate in 2012 and is the first Hispanic American to serve as a U.S. senator representing Texas.

Before being elected, Cruz was Solicitor General of Texas.

The mission of the Bully Pulpit Series is to encourage and facilitate political participation throughout the College of Charleston community by providing a platform for dialogue with our nation’s leaders. At its core, the series engages today’s youth by meeting students where they are – in the classroom, outside their residence hall and through their social networks – to create curious, informed and engaged individuals who are ready and able to engender political and social change.

As an effort of the College of Charleston Department of Communication and Department of Political Science, the Bully Pulpit Series gives young voters the opportunity to become involved in the political process as well as the issues that affect their communities. Originally created in 2008 to highlight the communication powers of the political pulpit, the mission of the series has expanded as a result of increased student and community interest and engagement.