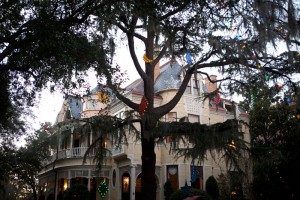 The Sottile House tree’s oversized holiday lights are a tradition from 1921.

One of the College of Charleston’s most treasured traditions, the Sottile tree lighting ceremony has been the College’s traditional debut of the holiday season since 1986 – but the tree has been lit more than 50 times in its history. When the Sottile family first hung oversized lights from its branches, it became the first outdoor tree in Charleston to be decorated with electric lights. It drew throngs of spectators for the next 20 years – until the nationwide blackout was mandated following the bombing of Pearl Harbor. Forty-five long years later, the grandchildren of J.C. and Alberta Sottile Long finally turned the tree’s lights on again in what was to become the College’s inaugural Sottile House tree lighting ceremony.

To look at the Sottile tree lighting ceremony as a CofC tradition is an understatement; since its first lighting in 1921, this tree and its spirit have withstood just not wars and catastrophic manmade events, but natural disasters and even threats from the College itself, which, in 2003, wished to replace the less-than-robust cedar of Lebanon with another tree.

Outraged students and faculty protested, petitioning the College to spare the tree that they noted “weathered ice storms, droughts and hurricanes and has been delightfully festooned with Christmas lights for years.” 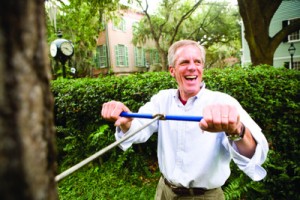 Biology professor Phil Dustan was part of that tree-saving alliance and even took a thin coring of the Sottile tree to establish the tree as a centenarian and to remind the campus of its biological importance.

“These are the things that record the history of the biosphere,” says Dustan, pointing to the lines running across the coring. “Each of these shows the tree’s different growth rates over the years.”

Its rings contain the details of Mother Nature’s not-so-obvious story, including various atmospheric and geological fluctuations. And, while the tree’s only wartime sacrifice may have been the forfeiture of its holiday lights during World War II, it was acutely susceptible to natural events like Hurricane Hugo, which caused a growth spurt.

Cedars of Lebanon, Dustan notes, have that traditional fir-tree shape when they’re young, so it probably looked more like a Christmas tree when the Sottiles first decorated it. But, as these trees age, they end up with bare trunks and big lopsided heads on them.

“If you were 100 years old and stood out in the weather all the time, you’d look beat up, too,” says Dustan. “Even though it’s strangely shaped and weird, it’s part of the College.”

And, in April 2003, the Faculty Senate agreed, unanimously passing the motion to protect this “outstanding, unique member of our campus arboretum,” thus upholding the College’s special holiday tradition.