Since coming to the College in 2014 to lead the School of Languages, Cultures, and World Affairs, Dean Antonio D. Tillis has been an impassioned advocate for greater cultural awareness and the importance of international experiences. We caught up with the globetrotting dean to find out more about his literary influences, his taste in music and his love of salsa (the dance, not the sauce). 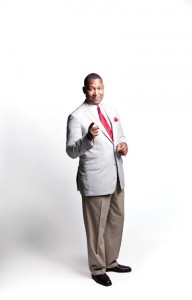 Antonio Tillis, dean of the School of Languages, Cultures and World Affairs

Q: WHY IS AN EMPHASIS ON INTERNATIONAL EDUCATION IMPORTANT?

A: Today’s generation of students is even more connected globally by means of technology, especially social media. It’s imperative that students in this generation understand their place and responsibility in the global world. There is virtually no profession that doesn’t have a global reach. It’s literally impossible to embrace fully the implications and understandings of such a statement without a focus on global education.

Q: HOW DID YOU BECOME INTERESTED IN SPANISH LITERATURE?

A: My earliest recollection is when I was probably 5 years old. My aunt Sheila was taking Spanish in high school. She taught me how to count to 10 in Spanish; a lesson that I never forgot. In the academic optional program at Memphis Central High, we had to choose areas of concentration; and, as you can probably guess, one of my areas was Spanish. I just loved the sound of the language and thought it neat to speak another language.

A: I would say salsa, a word that needs no translation. Being passionate about music and dance, when I hear the word, it makes me want to move. I love the hissing sound of the s in the first syllable.

Q:WHAT BOOK HAS HAD THE MOST INFLUENCE ON YOU?

A: Wow! That’s a tough one for a literary scholar. However, I must say that it’s a toss-up between Miguel de Unamuno’s Niebla and Piri Thomas’ Down These Mean Streets.

Unamuno’s work was the first philosophically creative work that challenged me to think about notions of being (ontology), knowing (epistemology) and existing (existentialism). I was totally consumed by this novel as protagonist Don Augusto (presumably Unamuno) grappled with ideas of creation, humanity, eternity and the like.

Additionally, I was fascinated by the life of Piri Thomas when I first read his memoir. The idea of someone expressing or trying to understand/celebrate a bi-ethnic identity in the U.S. during his coming-of-age era was quite novel. Specifically, partly due to my burgeoning love of Spanish and Latino culture, I was intrigued by Piri Thomas’ struggle to assert an identity that celebrated being both black and Spanish-Caribbean. It challenged critically my understanding of the “one-drop rule” and the Duboisian concept of the Negro “double- consciousness” in American society.

To read more about Dean Tillis, check out his full article in the Fall 2015 issue of the College of Charleston Magazine.