The studio of Brian Rutenberg ’87, in Long Island City in Queens, N.Y.

Brian Rutenberg ‘87 is a self-described Southern landscape painter. For one of his latest works of art, however, he tackled an environment quite foreign to Dixie: the desert.

Rutenberg was commissioned in 2015 to paint four large canvasses for the Tempe, Ariz.-based headquarters of DriveTime, a nationwide used auto dealer. After analyzing blueprints of the airy office building, and noting its extensive use of stone, concrete and glass, Rutenberg embarked on a mission “to bring the desert indoors.”

Five months and many paint tubes later, Rutenberg completed the canvases just three days shy of his 50th birthday. But that was only half the work: the abstract landscape paintings then needed to be shipped across the country in a climate-controlled vehicle from Rutenberg’s studio in New York. And because two of the paintings measure 20 feet by 6 feet and two others measure 9 feet by 10 feet, that climate-controlled vehicle needed to be a semi truck.

The large size of the paintings posed some logistical problems before Rutenberg even began painting. Normally, Rutenberg works from a studio on 27th Street in Manhattan. But the size of these canvases necessitated he obtain a second, “airplane hangar-like” studio in Long Island City in Queens, N.Y., with 18-foot-tall ceilings, said the artist. 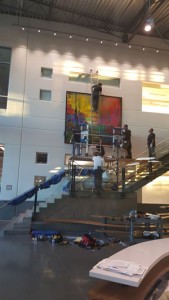 The installation of “Southlight” at the Arizona headquarters of DriveTime.

For inspiration and guidance, Rutenberg said he studied everything from French and American cabinetry, grandfather clocks, the paintings of Hans Memling and the photography of Diane Arbus. These influences helped him understand how to make the tall, skinny panels he was painting appear wider. That’s not always easy to do when “all we have is four sides of a rectangle with a flat surface,” said Rutenberg.

In the case of Memling, Rutenberg appropriated the German-born artist’s technique of using diagonals and stacked forms to suggest depth, volume, and “the promise of something about to happen.” In the case of Arbus, Rutenberg consulted her famous photograph “A Jewish giant at home with his parents, in the Bronx, N.Y., 1970,” in order to “intensify the orientation in which (the viewers) experience the real landscape.” As for the cabinetry and grandfather clocks, Rutenberg said they “helped me play with shifting volume in a tall canvas.”

Rutenberg witnessed the installation of the paintings in Tempe in November 2015. He deemed the project “one of the most exciting of my career,” and was elated to see the canvases hung within the office building.

“The painting never feels finished,” said Rutenberg, “until the paintings are seen outside my studio.”

Among the many honors he has received, Rutenberg has been a Fulbright Scholar, a New York Foundation for the Arts Fellow, a Marie Walsh Sharpe Grant recipient, a Basil Alkazzi Award recipient, and an Irish Museum of Modern Art Work Programme recipient. See more of Rutenberg’s art on his website, www.brianrutenbergart.com, and in the video below.