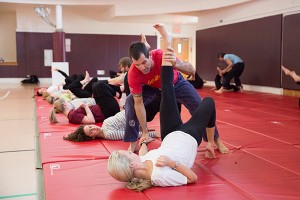 The College’s women’s self-defense course is more about brains than brawn.

“It’s not about muscle,” says Pat McGuigan. “It’s about actually using your brain and doing the techniques.”

The moves the trio teaches are based on Brazilian jiu-jitsu, a martial art that focuses less on strength and size than leverage and momentum. It was introduced to America in the 1980s by the Gracie family, who founded the Ultimate Fighting Championship (UFC) in the 1990s in order to demonstrate that jiu-jitsu could triumph over any other martial art.

“I was a college wrestler at the time, and that’s all I cared about,” recalls Venable. “I thought wrestlers could beat jiu-jitsu guys.”

But after seeing Royce Gracie take down a 260-pound wrestler in a UFC fight, Venable believed in jiu-jitsu. He spent 15 years living without sports due to a severe wrestling injury, but in 2009 he met McGuigan and began practicing jiu-jitsu himself.

As is evident by the name of the course, jiu-jitsu isn’t just for men. In fact, Venable says, “women are better built for jiu-jitsu than men” due to their flexibility.

Langville was surprised by how much she enjoyed learning the techniques.

“I liked the logic of it,” she said. “It really appealed to me as a scientist.”

While Venable and Langville were learning the ropes years ago, McGuigan began giving free lessons in Charleston’s Hampton Park to female friends who were interested in learning how to defend themselves. It turned out that many of the women had experienced assaults, and the lessons proved therapeutic for them.

“For me, jiu-jitsu based self-defense is both highly effective and personally empowering,” says Deanna Caveny-Noecker, associate professor of mathematics at the College. Caveny-Noecker was a part of the original group of women who learned from McGuigan.

“As a survivor of a stranger abduction at 28, I value women’s self-defense as one piece of a larger strategy to address physical and psychological violence against women,” she says.

The group formulated the idea to begin offering a for-credit course to students at the College. Professor Caveny-Noecker introduced McGuigan and Venable to the then-chair of the Department of Health and Human Performance, Mike Flynn, who ultimately decided to schedule the course. 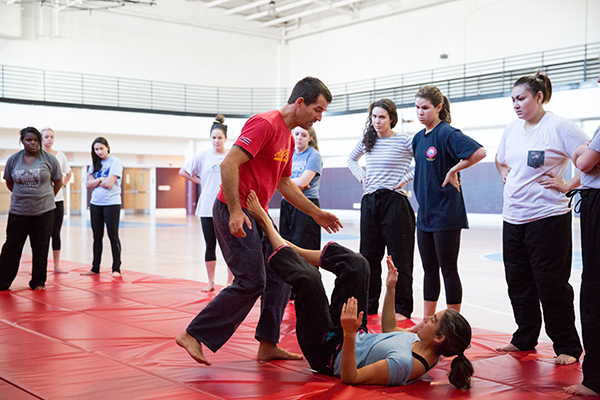 Outsiders might find some aspects of the class strange at first glance. Peeking into the Silcox Gymnasium, you might see students making circles in the air with their toes or rotating their hips to warm up. You’ll hear loud slaps of hands on giant red gym mats and see students rolling around on the ground as they practice techniques in pairs.

Many students expect something much different.

“When I first signed up for women’s self-defense, I honestly thought I would drop the class,” says senior communication major Ashley Sprouse. “I thought, ‘Oh, women’s self-defense. They’re going to teach me how to use pepper spray.’ Then on the first day, [our instructors] demonstrate what we’re going to learn by Amy throwing her husband around like it’s nothing.”

And while it may be intimidating at first, students quickly notice themselves feeling a greater level of self-assurance.

“I’m definitely learning a lot and can feel myself gaining more confidence when I’m walking around by myself,” says senior communication major Heidi Menke. “Everyone is really encouraging and the class is a very positive experience.”

Tyler Perini, a senior mathematics major and a star student of Langville’s, is the only male to have taken the course.

McGuigan, Venable, and Langville hope to offer the class to more diverse audiences in the near future. They’re working on a First Year Experience class with the Women’s and Gender Studies Program that would introduce more freshmen to self-defense techniques. And they would love to partner with Safe Zone to provide specialized training for the LGBTQ community at the College.

McGuigan often ends the class with a giant smile on his face as he, Venable, and Langville high-five students on their way off the mats.

“Great job today, ladies!” he says. “Next time, I want you to get just a little bit better.” 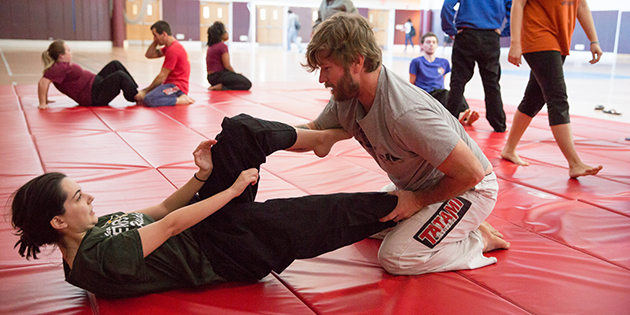 This article was written by Becca Starkes, a senior from Myrtle Beach, S.C., majoring in communication at the Honors College at the College of Charleston. She is also on the executive board of the Student Alumni Associates.