Marine Biologist Helps Save Salmon and Steelhead In Pacific Northwest

By Editor|2020-02-25T13:02:40-05:00February 19, 2016|Academics, Alumni|Comments Off on Marine Biologist Helps Save Salmon and Steelhead In Pacific Northwest
It was the late 1980s, and Tony Harold was in the thick of research for his dissertation on phylogeny and taxonomy of deep-sea hatchetfishes at Memorial University of Newfoundland. He had been working with a sample of hatchetfish when he noticed some specimens had a unique pattern of dark skin down the sides of their bodies, resembling something like a sideburn. Harold was intrigued, as the sample was supposed to contain a single species, yet seemed to contain multiple species. Could he have discovered a new species of hatchetfish? No matter his excitement, the young scholar was mindful of the larger research obligations he needed to fulfill in order to earn his doctorate. Returning the hatchetfish to an alcohol solution for preservation, he regretfully turned his attention to more pressing matters. “I just left it for future study. I wasn’t sure I was ever going to do anything about it,” says Harold, who has taught marine biology at the College since 1996. “I was hoping to one day find a clever student who could take on this project and find out how many species were in this species complex (a group of closely related species).” 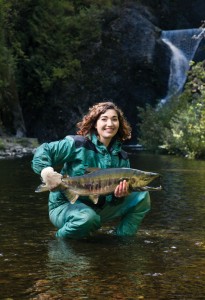 More than 20 years later, enter Iris Kemp ’10. Upon meeting the Honors College student, Harold sized her up, identifying within her a can-do attitude and an “infectious enthusiasm – not just for biology, but for everything.” As time went on, he found himself engaging in long, spirited conversations with Kemp about marine biology, of course, but also classical music, photography and more. “When Iris came along,” says Harold, “I immediately identified her as the student who could do this.” True to expectation, Kemp delivered. As part of her senior thesis, she helped identify new hatchetfish, a fish rarely seen or collected, as they live close to the bottom of the ocean and can fit within the palm of your hand. Or, to be more precise, Kemp differentiated a new species within the Polyipnus triphanos species complex. This was painstaking work, says Harold, and required professional scientific rigor. Soon, Kemp and Harold’s efforts, along with those of junior Sarah Kate Shore (who has continued Kemp’s work) will be rewarded when an article on their findings is published in the journal Zootaxa.
For Kemp, a talented clarinetist, the significance of her discovery hit home while she sat outside a room at the College, waiting for pep band practice to begin. “Wow, I’m a scientist,” she recalls thinking. “I identified a species. There’s something there. I made a contribution.” [pullquote align=”left” cite=”” link=”” color=”” class=”” size=””]“Wow, I’m a scientist. I identified a species…I made a contribution.” -Iris Kemp[/pullquote] Since her graduation with a degree in marine biology, Kemp earned a master’s in aquatic and fishery sciences from the University of Washington and started work as a research ecologist for Long Live the Kings, a nonprofit environmental group in Seattle that aims to restore salmon and steelhead populations in the Pacific Northwest. Kemp helps coordinate the Salish Sea Marine Survival Project, which brings together more than 40 U.S. and Canadian organizations working to determine the primary factors driving juvenile salmon and steelhead survival in the Salish Sea. One of her tasks has been to help develop and implement a large-scale monitoring program of zooplankton across Puget Sound. Zooplankton are indicators of ecosystem health and function, and are an important food source for juvenile salmon and other fish. By measuring the zooplankton community over time, scientists can model relationships between the food supply and fish growth and survival. The newly established monitoring program is so extensive it requires substantial collaboration between government agencies, nonprofits, academic institutions and local tribes. Another ongoing study in the project is monitoring steelhead survival via the use of acoustic tags. In their two-week journey from the mouths of rivers through Puget Sound to the ocean, as many as 90 percent of the out-migrating juvenile steelhead will die. To track the fish, Kemp and other researchers anesthetize the juvenile steelhead, make a small incision in their stomachs, insert a fingertip-sized acoustic tag, then sew them up and allow them to recover before releasing the fish back into the wild.
Acoustic receivers placed on the bottom of Puget Sound then track the steelhead as they migrate toward the ocean. Researchers also attach mobile receiver packs to the backs of harbor seals and take receivers out on tracking boats to compare steelhead movement with seal movement and to pinpoint sites of mortality. These data, along with concurrent data on fish health and condition, allow researchers to explore disease, pollution and predation impacts on juvenile steelhead. [pullquote align=”right” cite=”” link=”” color=”” class=”” size=””]“Ecosystem dynamics are incredibly interesting to me. How different groups interact with each other – I find that fascinating.” – Iris Kemp[/pullquote] “Ecosystem dynamics are incredibly interesting to me,” says Kemp. “How different groups interact with each other – I find that fascinating.” The Salish Sea Marine Survival Project and Kemp’s work are focused on the marine part of the salmon and steelhead life cycle, which occurs after they leave rivers for the ocean as juveniles, but before they return to those same rivers as adults to spawn and die. While significant resources have been applied to assessing and restoring the freshwater habitats of salmon and steelhead, much less effort has been devoted to focusing on the marine portions of their lives. “The fish have to migrate through the inland waters of the Salish Sea before reaching the ocean, and it seems like that experience affects their overall survival. Our research shows that, for several species, Salish Sea populations have different marine survival patterns than coastal populations,” says Kemp. “We think those survival differences are a really important issue to tease out.” There are no easy answers, however, and it takes years of monitoring to collect enough data for meaningful analysis. But with Kemp on the case, there’s hope these fish populations can be helped. As Professor Harold knows from his experience, “you ask Iris to do something, and she just does it.” This article first appeared in the fall 2015 issue of the College of Charleston Magazine.