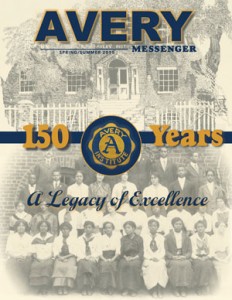 The Avery Messenger is the newsletter of the Avery Research Center and the Avery Institute of Afro-American History at the College of Charleston. It was one of 10 publications statewide to receive the award from the South Carolina State Library. The Notable Documents Awards are presented each year to focus on the important information compiled and produced by state governmental agencies. A panel of librarians and state employees selected the documents for inclusion on the list, grading the publications based on their designs, writing styles, and breadth of information. “The award helps to emphasize the importance of open and equal public access to information,” says Leesa Aiken, acting director of the South Carolina State Library. The Avery Messenger launched its inaugural issue in the Fall of 2003. The South Carolina State Library will officially recognize the publication during a ceremony later this month in Columbia.