Michael Bennett isn’t really one to sit idly by. He’s a man of movement, of enterprise. He doesn’t have the patience for hesitation. He can’t wait to take action. The way he sees it, you don’t get very far just sitting still.

Which is precisely why Bennett dropped out of school during his junior year at the College.

“I couldn’t stand sitting in those classrooms,” says Bennett, who came to the College as a part-time student after a couple years at the University of South Carolina. “There was just too much to do outside of those four walls.” 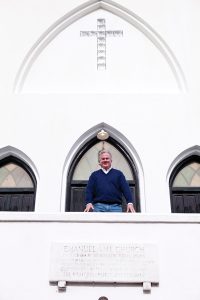 To be fair, Bennett had a lot going on: He was the owner of a bicycle and moped rental business on Market Street, a bellman at the Mills House, an intermittent deck hand on a cruise ship and a boxing champion (East Coast, 1972) in Olympic training.

It was working on some Glebe Street renovations with the College’s maintenance crew, however, that really motivated him.

“That’s when I started my life education,” says Bennett, who – after six months learning from the crewmembers – sold his moped business and started buying and fixing up properties around Charleston. “I used what I learned at the College from those older African American gentlemen on that crew, and that’s how I started my career.”

That was 37 years ago, when he founded Bennett Hospitality, a development company that now owns eight restaurants and 16 hotels, with many other properties in development.

“The College taught me what I needed to know to be successful. The irony is, I got my education from working there, not going there,” observes Bennett. “I got so much from my experience with that crew on Glebe Street. I owe a lot to them.”

That’s why, upon hearing about the Mother Emanuel tragedy in June 2015, Bennett jumped into action. He picked up the phone and called the College. Within minutes, he was setting up the “Mother” Emanuel African Methodist Episcopal Church Endowed Scholarship to honor the victims.

“It was pretty spontaneous. It was purely emotional. I was so overwhelmed by the grace, the forgiveness, with which the community handled it; it blew my mind. This was my reaction to those beautiful, forgiving people,” he says, adding, “I didn’t want just to write a check. That just felt impersonal for a tragedy that was so close to home.”

Not to mention close to his heart: Some of the men he worked with at the College lived close to the Calhoun Street church – and likely attended it as well.

“The idea of helping the people of Emanuel A.M.E. is moving to me. And I think it’d be especially moving if it helps a relative of the people who I used to work with at the College all those years ago. I think that would be a beautiful thing,” says Bennett, noting that the scholarship will be awarded for the first time for the fall 2016 semester and is open to any minority student from the Charleston peninsula.

“For me, it’s come completely full circle, because I’m giving back to the people who educated me so well and launched my career,” continues Bennett. “I wouldn’t be where I am today if it weren’t for them. They are the ones who prompted me down my life’s path – they got me going.”

And, of course, once he was going, he never sat idle again.

The impact the College of Charleston has on its students is boundless – and so are the reasons to give. With the finish line of the College’s Boundless Campaign in sight, there is no better time to give back – and make a boundless impact on the College and beyond. For more inspiration and information, find out why others give and explore ways you can contribute.