By Dan Dickison|2020-02-25T13:02:17-05:00July 12, 2016|Academics, Campus Life|Comments Off on Summer Internships Send Students Into Taiwanese Forests, French Caves, and More
For most college students, internships – or hands-on experience in the field – can be a tremendous boon. These experiences can augment skill sets, increase awareness of a particular field or industry, and connect students with influencers who often end up providing mentorship, a letter of recommendation and sometimes even a job offer. All of that is true whether a student’s major is in the sciences, business, the humanities or the arts. Consequently, it’s not surprising that college students all across the country prize internships. Here’s a look at the wide variety of engaging internship roles that some College of Charleston students (and one recent grad) have secured for themselves this summer. 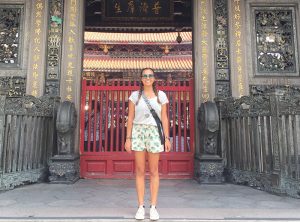 After arriving in Taipei, Taiwan, Paige Allen ’16 took time to see a few historic sites before beginning her internship.

Meet Paige Allen ’16, who graduated in Spring 2016 with a bachelor of arts in communication and is spending the summer in a forest in Taiwan. Allen is one of only three U.S. students or graduates who were chosen from an international corps of applicants to fill 30 slots in a program run by the National Taiwan University School of Forestry. Her internship involves living in a Taiwanese forest and blogging about the experience as a means of raising awareness regarding that form of tourism. “I’m being paid (including travel and living expenses) to research and promote the forest. They wanted an English speaker who could communicate with the U.S. audience. I’m working with a woman from Spain and a guy from the Philippines and we’re not only blogging, we’ll also be making a promotional video as well. I’m not sure where this experience will lead, but I know it will open up opportunities for me. If I could make this a career,” Allen says, “that would be ideal.” 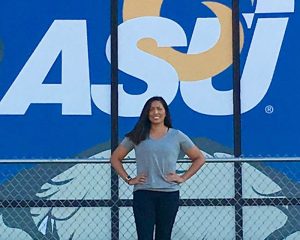 Sara Maria Segoviano poses during a rare free moment at her internship in Texas.

And consider Sara Maria Segoviano, a rising senior who is majoring in exercise science. Segoviano is spending much of the summer working with the strength and conditioning coaches at two major collegiate football programs – the University of Texas and Texas Tech University. Her average day starts ultra early with her arrival at the practice facility by 6 a.m. The majority of her time is spent working alongside each program’s head strength and conditioning coach, and assisting football players on a one-on-one basis. “This is tremendous experience,” says Segoviano. “Ordinarily, you’re required to be certified in this field and have a master’s degree to be able touch an athlete, so I’m being given an amazing opportunity.” Segoviano is earning academic credit for her internship, but the best part, she says, is that this experience will really augment her chances of working for top-tier athletic programs in the future. “It’s exceptionally rare for a woman to be in this position, and that’s something I want to help change in the future.” 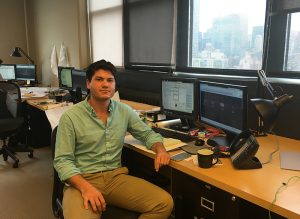 Peyton Smith in his workspace in midtown Manhattan at Robert A.M. Stern Architects.

Then there’s Peyton Smith ‘17, who is spending the summer in New York City, interning for renowned architect Robert A.M. Stern. Smith, a historic preservation and community planning major, secured this opportunity by approaching Stern when he was on campus this spring to receive the Albert Simons Medal of Excellence from the School of the Arts. “Professor Ralph Muldrow from the historic preservation program introduced us,” explains Smith. “He also mentioned to Mr. Stern that I was interested in a summer internship. Stern didn’t say much then, but I figured I should shoot him an email with my resume and portfolio anyway.” A few weeks later, Smith got a call from the human resources department at Robert A.M. Stern Architects offering him an interview. “I flew up to New York that week and interviewed, and I guess I made a strong impression because it worked out. Now, I’m assisting with a client’s residence on Virginia Beach, mostly drafting interior elevations and preparing presentations for the client. I’m gaining important professional experience and the internship will be a strong component of my résumé, too.”

READ MORE ABOUT PROFESSOR RALPH MULDROW AND HIS TALENT FOR WATERCOLORS 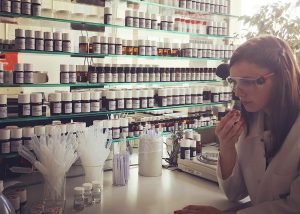 Melaina Castengera at work testing the stability of fragrance molecules in Germany.

Or, consider international business major Melaina Castengera ’17, who is based in Germany this summer participating in the Department of German and Russian Studies’ internship program. She found a role for herself with global fragrances firm Symrise where she’s engaged in a variety of duties from financial business planning to technical marketing for aroma molecules. “I’ve been consolidating the company’s competitor profiles,” explains Castengera, “and I have participated in an audit with a Japanese pharmaceuticals client as well. I attend meetings with the technical marketing manager where discussions are held in German regarding the portfolio of products, the planning process and strategies.” Castengera says she sought this internship as a way of distinguishing herself from her peers. “So far, this has been one of the most educational experiences of my college career.” 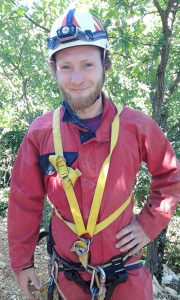 Jonah Crisanti, preparing to descend into the caves in France.

You may also want to learn about French major Jonah Crisanti ’18, an Ocean City, Maryland, native who is in France this summer working on his archaeology minor by assisting the Federation Francaise de Speleologie on two different archaeological digs. “This internship has given me the chance to use everything that I have been learning in the classroom over the past two years,” says Crisanti. “And the hands-on experience here has been priceless. I highly suggest all students step out of their comfort zone and make the most out of their studies with an internship.” Crisanti has had various duties in his role as an archaeological intern. “I’ve been preparing food for the team in the morning and then sifting sediments at the site as well as using hammers and paintbrushes in the caves, excavating through the different stratigraphic levels at this dig. This experience hasn’t just furthered my academic understanding of archaeology, but it’s also expanded my cultural horizons and enabled me to gain an understanding of the possibilities that lay ahead after graduation. The greatest advantage is that I’ve made connections and been able to fully immerse myself in a culture that’s foreign to my own.” 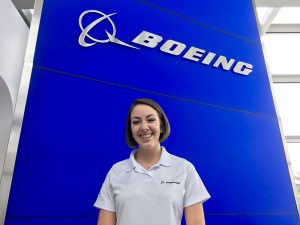 Rising sophomore Eliza Starr is the College’s youngest intern ever at Boeing in Charleston.

And finally, there’s Eliza Starr, who is sticking close to home for her internship with Boeing Charleston’s IT group. Starr, a rising sophomore enrolled in the Honors College, is a computer science major.

“This internship was initially very intimidating,” she says, “because Boeing is such a well-established global company. However, my extraordinarily kind and helpful coworkers make the company feel small and welcoming, and I have found a remarkable number of opportunities to mature my soft and technical skills. I am incredibly grateful to intern at a company where the opportunities are diverse and where my young perspective is heard and valued.”

For more information about internships, check out the College of Charleston’s Career Center.