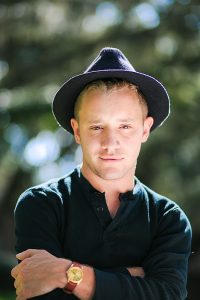 When any breath could be your last, you see things a little differently. Take it from Brennen Reeves ’14. Born with the progressive lung disease cystic fibrosis, Reeves has struggled for every breath he’s ever taken. He’s never known what it’s like to catch his breath. In 2011, when the disease nearly choked the life out of him, Reeves was given a double lung transplant – which, while extending his life, still doesn’t mean he can breathe easy.

Working with David Lee Nelson ’00, who taught Reeves’ solo performance theater class at the College of Charleston, the theater major documented his story of survival in a one-man show, Breathe. A True Story, which he first performed in 2014 and was named one of the top five productions to see in “Pick from the Pros” at the Piccolo Spoleto Festival in 2015.

Read a review of Breathe.

After touring regionally and nationally, Breathe is returning to the College of Charleston on August 4, 5 and 6 at 7:30 p.m. in Theatre 220 in the Simons Center for the Arts, 54 St. Philip St., Charleston, S.C. The show will benefit the Charleston chapter of the Cystic Fibrosis Foundation and the College of Charleston Department of Theatre and Dance. Admission is $22. Tickets are available online, by calling 843.953.6306 or at the box office on show dates.

Fore more information about Reeves, check out article about him in the fall 2015 issue of College of Charleston Magazine or visit his website.