Despite owning his very own bowling alley, David Crowley ’02 claims not to have knocked down any pins for at least two years. When asked about his average score, he goes mum, which he confesses is a rare occurrence.

“No comment,” he says, before mentioning a torn rotator cuff. “I’m retired.”

You can forgive Crowley for not working on his game. Though his business The Alley features eight gleaming lanes, the hip spot off Upper King Street is much more than a place to toss a bowling ball. In fact, The Alley is many things: part sports bar, part arcade, part affordable gourmet eatery and part event space and party venue. This keeps Crowley very, very busy.

Day after day, night after night, the Alley is consistently packed, whether filled with league bowlers, staffers at a company retreat, visitors to Charleston, or locals enjoying drinks on trivia night (which is gamely hosted each week by alum Noah Smith ‘08, who is also a talented actor and the College of Charleston’s “Most Boundless Man”). 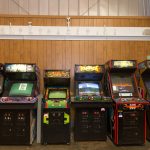 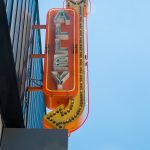 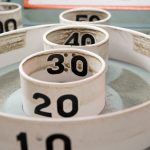 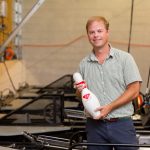 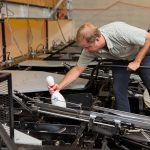 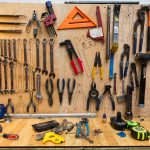 Crowley and a few partners opened The Alley in November 2012, converting an old liquor distribution warehouse on Columbus Street into an airy, clean and retro-inspired bowling alley and bar. It has since become a singular presence on the peninsula, the only public downtown bowling alley and one of the few places to combine cheap and tasty eats and drinks with the opportunity to recreate and host large events.

Crowley, who majored in business administration, credits his employees for The Alley’s success, praising their experience and enthusiasm.

“I’m very proud of the culture and team that’s dedicated to The Alley,” he says.

Among the all-star staff is pinsetter technician Justin Schiavone, a mechanical genius who spends much time behind the scenes, maintaining the eight pinspotters, or bowling machines, tucked behind a wall at the end of each lane.

Crowley brags that the pinspotters each average 300 games a week and are rarely out of service, thanks to Schiavone’s care and supervision.

Schiavone knows almost everything there is to know about bowling equipment, able to answer almost any question about the sport. Average lifespan of a pin?

-They should be swapped out yearly.

What’s inside a pin?

How fast do most people bowl?

-Between 15 and 30 miles per hour (and you can ask for The Alley to turn on a speedometer for your lane).

Crowley’s bowling alley knowledge also runs deep. For example, he explained the ins and outs of bowling shoes, which can be boiled down to three basic facts.

2.) Bowling shoes don’t protect the floor, but rather the joints in your body, allowing your foot to slide smoothly after the release of the bowling ball.

3.) That magic disinfectant sprayed liberally into each pair of shoes is nothing more than Lysol.

Before becoming an owner of The Alley, Crowley worked as a sports agent for professional golfers before taking a position within wealth management. Eager to escape the buttoned-up business world, he sprung at the chance to open The Alley, which he leverages often to benefit local charities.

RELATED: Crowley’s success with The Alley landed him on The Charleston Regional Business Journal’s Forty Under 40 list.

Beyond donating the use of bowling lanes to nonprofits, The Alley annually hosts its 70’s-themed Studio 300 disco party, with a portion of proceeds donated to Be a Mentor, a charity in which Crowley serves on its board.

“We have roller girls every year for this annual party– that’s one guarantee, ” says Crowley, referring to the event that serves as their anniversary party. “We really pride ourselves on giving back through all the nonprofit events we help and host.”

Crowley also volunteers his time and talents with The College, serving on the executive board of the Cougar Club and on the advisory board of the College’s Department of Tourism and Hospitality Management.

It’s enough to keep anyone occupied, and is why Crowley hardly ever bowls a frame. But even though he stays off the lanes, Crowley’s life, business and philanthropic ventures are certainly on a roll.

Surveying The Alley, he says, “I couldn’t be happier than where we stand today.”