On a wall inside the College’s Joseph P. Riley, Jr. Center for Livable Communities hangs a photo of the center’s namesake, jogging along the city’s famed Battery in the early 1980s.

It’s an apropos image given Joe Riley’s legendary energy and productivity during his four decades as Charleston’s mayor. But even though he left City Hall in January 2016, the pace of his life hasn’t yet slowed.

In between speaking obligations, receiving awards for public service, fundraising for the International African American Museum, and teaching at his alma mater, The Citadel, Riley has also been reengaging with the center that has carried his name since 2001. 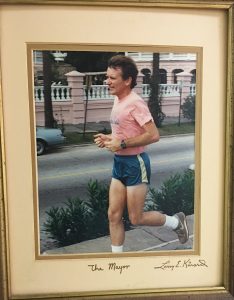 Over the summer, Riley assumed the position of executive-in-residence at the Riley Center, which is appropriately located on lower King Street – a once run-down corridor that he helped transform into a nationally recognized shopping district. The revitalization of King Street is just one of many success stories among a long list of urban planning achievements that Riley hopes to share through his new role at the College.

“I see the center as having great potential to help communities, cities, towns and institutions in South Carolina successfully address issues in city planning, development, human interaction and progress,” Riley says. “Charleston the city is such a great teacher of city planning and urban design. The lessons are transferable to great big cities or tiny little towns. I think that’s a real great opportunity for the College.”

Since Riley’s new position was announced earlier this year, center director and political science professor Kendra Stewart says she’s received a steady stream of inquiries from campus and around the country for Riley to lecture and speak to classes and other groups. Her biggest challenge, she says, will be to harness the enthusiasm and giving spirit of someone who has a hard time saying no to any request.

“What the Riley Center wants to do is capture and sustain and share the legacy of Joe Riley in Charleston,” Stewart says. “What does Joe Riley mean to the city of Charleston? What are his greatest contributions? What are the stories that we need to make sure we capture and save in perpetuity so people can learn from him for years and years to come?” 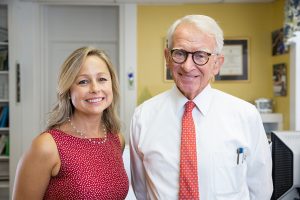 Kendra Stewart, director of the Joseph P. Riley, Jr. Center for Livable Communities, will work with the center’s namesake, former Charleston Mayor Joe Riley, as he settles into his role as the center’s executive-in-residence.

Among some of the center’s initiatives in which Riley will be involved are working toward the launch of a graduate program in community planning, policy and design, which is currently in the state approval process, and exploring ways and potential partners to reinstitute a civic design center in South Carolina.

Already, the College is partnering with the City of Charleston to make Riley’s personal papers publicly accessible to scholars, researchers and others interested in studying his leadership and expertise in civic design and livability issues. Plans are also being made to tap Riley’s vast network of national contacts to establish an advisory board to help shape and guide the center’s work.

Riley says another one of his top priorities is to begin writing his memoirs, and he hopes that his position at the College will help him better organize his post-mayoral life and create more time for writing and reflection in his daily schedule – in other words, help him slow down.