By Mike Robertson|2020-02-25T13:01:22-05:00November 11, 2016|Academics|Comments Off on Historic Preservation Students Drive Research on Classic Car
It was a rare opportunity to document the history of a classic car. Students from the College of Charleston’s Historic Preservation and Community Planning program recently researched the complete history of a classic 1920 Anderson Six Convertible Roadster as part of a course titled “American Automotive History and Documentation.” The vehicle, owned by Paul and Kathleen Ianuario of Duncan, South Carolina, is one of only seven known survivors of South Carolina’s first automobile company, The Anderson Motor Company. This research on the Roadster conducted by the students makes it the first automobile added to the National Historic Vehicle Register because of its local and regional historic significance. The Roadster now joins other significant automobiles on the register, including a 1964 Shelby Cobra Daytona Coupe prototype; President Ronald Reagan’s Willy’s ‘Jeep’ CJ-6; and the first presidential limousine, a 1909 White Steam Car used by President William Howard Taft. 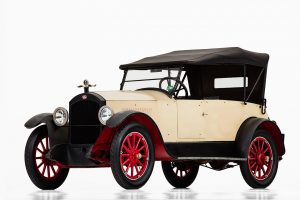 Working closely with the Historic Vehicle Association and using archive records in Charleston, Columbia, and Rock Hill, S.C., the students were able to piece together important information about the vehicle, including the car’s ownership through the years. They also conducted a detailed photographic study of the car to better understand the vehicle’s South Carolina-made materials and engineering components. Scaled measured drawings – similar to what is done for historic buildings – were also made of the car. The project was funded through generous grants from the Restoration, Preservation, Mentorship (RPM) Foundation and the Historic Vehicle Association. When the research was completed, the information was sent to the Historic Vehicle Register, which was established within the U.S. Department of the Interior to document historically significant automobiles from America’s past in U.S. Library of Congress. In the early 1900’s, the Anderson Motor Company built about 5,500 of the roadsters in Rock Hill. The car’s body style allowed the car to quickly “convert” from a sleek roadster to a five-passenger touring car. The Roadster was first offered for the 1919 model year and remained in the lineup until 1922. Architectural history professor Barry Stiefel believes that this historic preservation class is the only university course in the country that is conducting both teaching and research on automotive heritage. “We are using methods that have already been developed for historic buildings and landscapes, with some minor adaptions for the uniqueness of automobiles,” says Stiefel. The Historic Preservation and Community Planning program envisions this class as the first in an expanding curriculum that will include historic motor vehicles in addition to buildings, landscapes and other aspects of heritage material culture. Featured Photo Credit: Historic Vehicle Association