It’s almost impossible to reflect on the College of Charleston without envisioning the beauty of its grounds: the mystique of the Cistern Yard, the intrigue of its brick walkways, the seclusion of its hidden gardens, the enchantment of its Spanish moss and the comfort of its sunny lawns.

And it’s almost impossible to envision the College’s grounds without the influence of former campus arborist and grounds director, John Davis, who passed away on Dec. 15, 2016, leaving behind a landscape of learning that will enrich the lives of generations to come. He was 74.

Davis served in the U.S. Marine Corps Reserves before earning his bachelor’s degree in fine arts from the University of South Carolina, where he became one of the first academically trained sculptors in the state.

After some postgraduate work in sculpture and pottery at USC and Harvard University, Davis went on to teach ceramics at USC and the Richland Arts School in Columbia, South Carolina. He also served as the associate director of the Columbia Museum of Art for 12 years. One of Davis’ two paintings hanging in the third-floor lobby of the College’s Theodore S. Stern Student Center

It was when he opened a landscaping business in Fairhope, Alabama, that Davis turned to the earth as his artistic medium, laying the foundation for his work as the College of Charleston’s director of grounds.

Davis arrived on the CofC campus in 1989, a few months before Hurricane Hugo did. When Hugo left behind a virtually blank canvas, Davis suddenly had creative license to design a true landscape for learning – a world where the trees, plants, walkways and benches had meaningful, strategic places.

Although he returned to pottery in 2005 – regularly working in his rented studio space up until the day he died – Davis spent the next 20 years creating the work of art that is the College of Charleston campus.

“As a landscape designer, I visualize things from overhead, and I’ve found that if it looks good in the drawing, it’ll look good in the garden. The colors, the mass, the texture, the lines: It helps to have an eye for these things,” he said in a 2008 interview. Fortunately, Davis knew his plants. He also knew the importance of species diversity – he once said “because if you don’t, and there’s a disease, you lose one plant, you lose them all” – and brought to campus everything from bamboo to papyrus, Satsuki azaleas to pawpaw, Chinese jujube to sago palms, persimmon trees to 40 types of Asian gingers.

Related: Read about the edible plants that John Davis planted on campus, featured in the October 2007 issue of Portico.

Laying the blueprint for an academic retreat in one of the busiest parts of Charleston, Davis created an environment that both removes us from the rest of the world and makes us a very real part of it. And it’s because of him that the College of Charleston was designated a National Arboretum in 1991 and later was named one of the nation’s 20 most beautiful campuses, one of the 362 most beautifully landscaped spots in the country and one of South Carolina’s eight American Society of Landscape Architects’ Medallion Sites for its significance in creating a better world.

For his part, Davis was awarded a certificate of service from the State of South Carolina and the Charleston Clean City Commission Certificate of Appreciation from the City of Charleston.

“It has been a life’s work,” said Davis upon his retirement in 2009, when he was honored with a sign underneath the meta sequoia tree at the south end of Rivers Green. “I only wish I had time to do more.”

What Davis managed to do during his 20 years on campus is both incomprehensibly profound and visibly obvious.

You can’t step onto campus without seeing Davis’ work: Every brick, every leaf, every bloom, every tree has his mark. But his is the kind of legacy that doesn’t just last: It grows, multiplying its own value and impact for the rest of time.

The College of Charleston is a better place because of John Davis, his service,  his intellect, his vision and his love.

A memorial service will be held in John Davis’ honor at the North Charleston United Methodist Church (1125 East. Montague Ave., North Charleston, S.C.), at 1 p.m. tomorrow, Tuesday, Jan. 24, 2017, on what on what would have been his 75th  birthday.

Memorials to John Davis may be made to the North Charleston United Methodist Ministries Service, 1125 E. Montague Ave., North Charleston, S.C., 29405. A memorial message may be sent to the family on his obituary page. 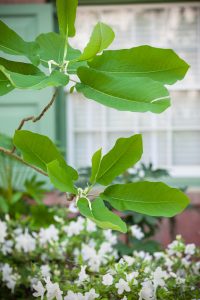 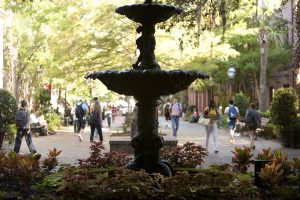 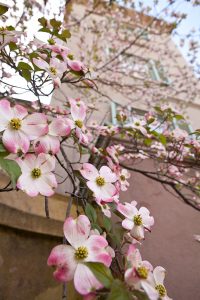 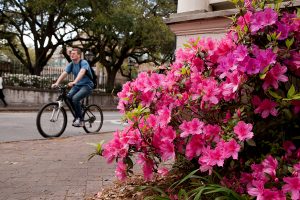 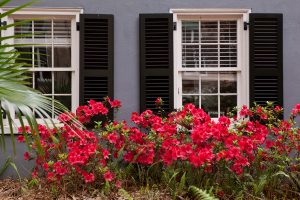 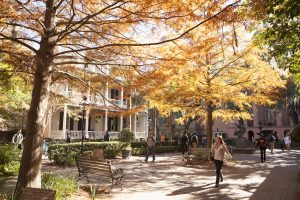