Josh McFadden ‘10 has never been afraid of big launches – whether spearing his body into the water as a student-athlete on the College’s swim team, soaring skyward from an empty swimming pool as an avid skateboarder or, as with his latest endeavor, helping launch Charleston’s first full-scale publicly funded skate park.

McFadden was recently tapped to manage SK8 Charleston, a highly anticipated skate park taking shape on a 3.5-acre parcel in Charleston’s Neck area between Interstate 26 and the Ashley River. After years of negotiations, ownership changes, and overcoming permitting hurdles, this newest addition to the Charleston County Park and Recreation Commission system is set to open to the public on March 4, 2017. (A grand opening is planned for March 3).

The concrete playground at 1549 Oceanic St. is the kind of place skateboarders dream about: There’s 32,500 square feet of skating surface, a 200-foot-long snake run, a street course full of custom-designed obstacles and intermediate and pro bowls.

For McFadden, who majored in political science with minors in environmental studies and studio art, the park is validation of a long-held belief that he could combine his passion for skating and surfing with his professional acumen as a manager and problem-solver – skills he learned at the College and refined throughout his early career.

“I always believed that I could find a way to work at doing something I love,” says the Philadelphia native who started swimming when he was 5 and took up skateboarding in middle school. “This is absolutely my dream job.” McFadden skates at another skate park in the Charleston area.

While he remained passionate about surfing and skating at the College, McFadden had to be careful not to get hurt and jeopardize his athletic scholarship as a member of the swim team. He was the team’s captain his senior year.

As a student, he also put his swimming skills to use as a lifeguard for the Charleston County Park and Recreation Commission, establishing a professional relationship that would eventually play a part in his being selected to manage the new skate park.

After graduation, he managed rental properties on Isle of Palms and Folly Beach. And despite some good-natured ribbing from friends and family who encourage him to find a grown-up hobby, he has never outgrown his love for skating.

He says those closest to him have always been supportive of his skating obsession, including his new wife, Kalyn Cogswell McFadden ‘12, also a former CofC swimmer who is now an occupational therapist at Medical University of South Carolina. Before City of Charleston and County Parks leaders first began discussing the feasibility of building a government-funded skate park in Charleston, McFadden and other civic-minded skaters formed a non-profit organization called Pour It Now to advocate for such a project.

McFadden, who was on Pour It Now’s executive board, believes that the organization was instrumental in getting the park off the ground. While he always assumed he would skate the new facility after it opened, until he was hired as a Charleston County Parks employee in November 2016, it seemed too good to be true that he’d also get paid to manage it.

It’s obvious from the moment McFadden greets visitors outside the gate of the construction site that he’s tremendously proud of the park and what it promises to become for legions of skaters and their families. McFadden skates at another skate park in the Charleston area.

The park was designed by Team Pain, one of the nation’s premier skate park builders. Under the direction of president and founder Tim Payne, the Winter Springs, Florida, firm has designed and built parks all over the country.

“In the skateboarding world they are one of the top park-building companies,” McFadden says. “I would expect that we will draw visitors nationally.”

In addition to the multitude of skating surfaces and obstacles, the park also includes a shop, a second-story viewing deck, event space, concessions, seating, restrooms and stadium-style lights to keep the fun going past dusk.

The park will also offer skating lessons, camps and educational outreach projects. As opening day draws near, McFadden has been working closely with fellow CofC alum Sarah Reynolds ‘04, publicity coordinator for the Charleston County Parks and Recreation Commission, whose job is to promote all of the county’s parks.

Standing in the space where his office will be located on the second floor of the park’s main building, McFadden takes in the expansive views overlooking the entire park and the picturesque Ashley River marshland. Reflecting on the teasing he’s endured as a grown man who loves to skateboard, a satisfied smile breaks across his face.

Below: See photos of McFadden skating at another local skate park. Photos by Reese Moore. 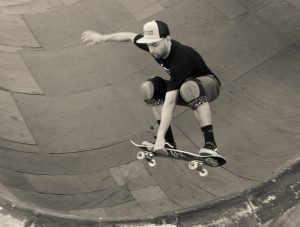 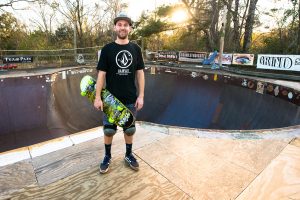 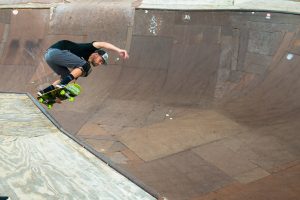 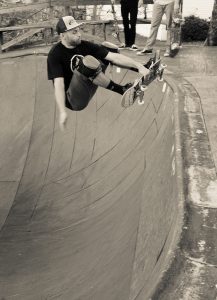 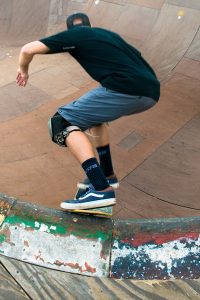