On each Friday during Black History Month, The College Today will take a look back at the African-American students, faculty, community members and institutions that have made the College of Charleston the place it is in 2017. Today, we take a look back at Eddie Ganaway, the College’s first black graduate. This retelling of his story was adapted from a 2007 College of Charleston Magazine article titled “Invisible Man” by Eric Frazier ’87.

On one sultry summer day in the 1950s, Eddie Ganaway ’71 wandered a few blocks south of the Lincoln Theater – then downtown Charleston’s only theater that allowed black moviegoers – and found himself gazing at the College of Charleston. 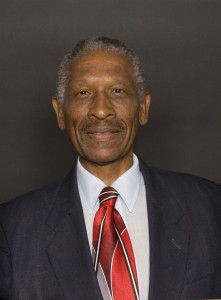 Ganaway, then between 12 and 15 years old, hadn’t ever heard of the College. But the North Charleston boy knew he wanted to go there one day. It was a daydream at the time — CofC, the nation’s first municipal college, had transformed into a private institution in 1949 to avoid integration — but less than two decades later, Ganaway would be the first black student to walk across the Cistern in a white dinner jacket on Commencement Day.

“The College has been as influential in my life as anything I’ve ever done,” Ganaway said in a 2007 interview.

Ganaway, the fifth of nine children, grew up in Charleston Heights, just west of the Charleston Naval Shipyard and commercial docks where his father worked as a welder and longshoreman. He graduated from Bonds-Wilson High School in 1962 and became the first person in his family to attend college when he accepted a small scholarship from Benedict College, a historically black college in Columbia, South Carolina.

But he had to leave school when money ran out, enlisting in the Navy and serving as a medic during the Vietnam War.

While Ganaway was serving the country, the Civil Rights Movement began to break down the institutions of the Jim Crow South. The Rev. Martin Luther King Jr. bellowed “I have a dream” on the National Mall in 1963 during the March on Washington for Jobs and Freedom and was awarded the Nobel Peace Prize a year later. President Lyndon B. Johnson signed into law the Civil Rights Act of 1964, barring discrimination based on race, color, religion, sex or national origin. The Voting Rights Act of 1965 ensured voting rights for minorities well into the future.

Colleges and universities also began to desegregate amid the rising tide. Some saw tumult: in 1963, Alabama Gov. George Wallace stood in front of a building at the University of Alabama in an attempt to stop James Hood and Vivian Malone from registering for classes. The University of South Carolina and Clemson University also accepted their first black students that year.

The first black students enrolled at the College of Charleston a few years later, in 1967. Ganaway wasn’t part of the first class — two black women started classes a semester before him — but he enrolled for the Spring 1968 term with the nudging of longtime admissions director Fred Daniels.

Ganaway said in 2007 that he was “terrified” when he started taking classes. He was largely ignored by white students who he called the “cream of the crop of the white aristocracy” but wasn’t the target of any overt racism. His studies also suffered without the support network he had at Benedict College.

But he said professors took him under their wings and his grades rebounded. He also met history professor George Heltai, a Hungarian expatriate, and became friends with his children.

By 1970, he was comfortable enough to mount an ultimately unsuccessful campaign for student body president.

“He was a highly respected campus leader,” Daniels said in 2007. “He was wildly public, and wildly popular.”

And just a year later, Ganaway earned his spot in the annals of the College’s history by becoming the first black student to don a graduate’s white dinner coat.

At the time he didn’t look at his graduation as a proud moment for the College; as he said in 2007, “I used to say to people, ‘Rather than being proud of me being the first black, the College of Charleston ought to be ashamed of itself that I was the first black, and that it took so long.”

But he added “there’s a fair amount of water under the bridge now.” 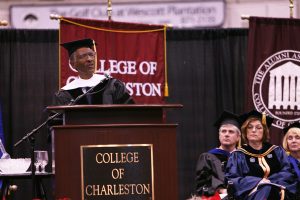 Eddie Ganaway speaks after being awarded an honorary doctorate in 2007.

Ganaway stayed connected with the College throughout his adult life. He spoke with alumni groups and gave lectures on Martin Luther King Day. And in January 2008, he helped celebrate 40 years of desegregation at the College.

The College likewise honored Ganaway. He was awarded a Doctor of Humane Letters Degree in 2007. The College also named both the Eddie Ganaway Distinguished Alumni Award and Eddie Ganaway Diversity Education and Resource Center in his honor.

See Ganaway’s profile in the Fall 2007 issue of College of Charleston Magazine below.

InvisibleMan by Darren Price on Scribd