Looking Back at the Avery Normal Institute

On each Friday during Black History Month, The College Today will take a look back at the African American students, faculty, community members and institutions that have made the College of Charleston the place it is in 2017. Today, we take a look at the Avery Normal Institute, one of Charleston’s first secondary schools for emancipated slaves and free people of color and later became the College of Charleston’s Avery Research Center for African American History and Culture. This article has been heavily adapted from the Lowcountry Digital History Initiative exhibit “Avery: The Spirit That Would Not Die, 1865-2015.”

The Avery Research Center for African American History and Culture is rooted in history — down to its bricks.

That’s because for more than 150 years, the building that is now one of the state’s top facilities for the collection, preservation and promotion of the history and culture of the African diaspora has served as an important gathering place and school for black Charlestonians.

The center started out as a school that was founded in 1865. Completed in 1868, the Avery Normal Institute was one of the first secondary schools to legally offer formal education for emancipated slaves and free people of color and served as a hub for African Americans in the Lowcountry until it closed nearly 100 years later.

“Avery was a groundbreaking institution,” said Avery Research Center Public Historian Mary Battle in 2016. “As a teacher training school, many of Avery’s graduates went on to teach throughout the Lowcountry and played a big role in promoting education, as well as asserting equal rights, citizenship, local activism and the civil rights movement throughout the twentieth century.” 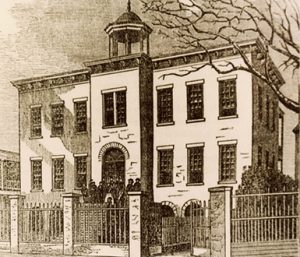 Built by the Freedmen’s Bureau, the Avery Normal Institute opened in May of 1868, courtesy of the Avery Research Center.

Avery Normal Institute was established by the American Missionary Association, a protestant New York City-based abolition group credited with playing a role in the founding of several historically black colleges and universities (also known as HBCUs) in the 1800s including Howard University.

The institute was initially named for New York City abolitionist Lewis Tappan but was later renamed Saxton after Rufus B. Saxton, a union general who later served as an assistant commissioner of the federal Freedman’s Bureau tasked with aiding freed slaves in the South during Reconstruction.

The school operated out of several buildings and was staffed by white missionaries from the Northeast and members of Charleston’s Antebellum free black community. Early staffers included the Rev. Francis Cardozo, who became the first African American to hold a statewide office in the United States when he was elected South Carolina’s Secretary of State in 1868. Thomas Cardozo, Francis’ brother, was the first principal of the Institute, but was later replaced by Francis.

Francis Cardozo was able to persuade the American Missionary Association to seek $10,000 from the estate of the Rev. Charles Avery, a Methodist philanthropist from Pittsburgh, to construct a permanent school. Other agencies — including the missionary association, Freedman’s Bureau and local merchants — also donated money, and the Avery Normal Institute was completed in 1868 at a cost of $17,000.

In the new building, which melded the Italianate style popular at the time with common Charleston architecture features such as building-length piazzas, the school expanded its mission to include teacher training. A significant number of Avery’s early students came from families of free people of color before the Civil War, unlike other schools established by Northern missionaries that had a majority of students from formerly enslaved families. Because of this, early Averyites were perceived as elitist.

Students at the school saw it as their mission to impact black education in the Lowcountry and Charleston at large. In 1900 a survey of Avery’s 400 graduates revealed that two-thirds went on to become schoolteachers. Because African American teachers were prohibited from teaching in all but one of the city’s black public schools, many went to teach at one-room schoolhouses throughout the Lowcountry.

Benjamin F. Cox became the school’s first black principal since Francis Cardozo in 1915. Also a political activist, Cox worked with the NAACP, the nation’s oldest civil rights organization, on a 1919 proposal to allow African American teachers in Charleston’s black public schools. Within two years, there were black teachers and principals — many of whom were Avery graduates — at black schools throughout the city.

The school also became a hub for burgeoning civil rights efforts in the 1910s and 20s. Many graduates went on to join the Charleston Interracial Committee, a group that worked to expand education opportunities for black Charlestonians. And, another graduate, Edwin “Teddy” Harleston, formed a Charleston chapter of the NAACP in 1917. Cox was a charter member of the chapter, and the school became a safe haven for the organization.

In 1944, the American Missionary Association decided they would no longer support secondary schools, so Avery — at the time Charleston’s only accredited black high school — had to become a public school funded by the city. Renamed Avery High School, the school became a public college preparatory high school in 1947. 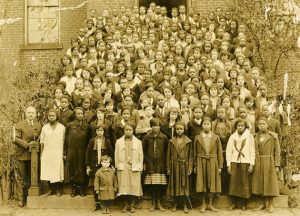 By 1924, the Avery Normal Institute was thriving as a teaching school, courtesy of the Avery Research Center.

But it didn’t remain open for long. The city school board voted in 1949 to build a new Burke High School facility and merge Avery with the new institution as white leaders throughout the state poured money into black schools in an attempt to improve them and prevent desegregation under the “separate but equal” doctrine used to justify segregation.

Avery closed in 1954, the year the Supreme Court ruled segregation unconstitutional in Brown V. Board of Education.

Charles E. Palmer bought the Avery building the year after it closed and reopened it as Palmer College, a small business school, from 1955 until the late 1970s. Once Palmer College became part of Trident Technical College and moved to North Charleston, Avery alumna Lucille Whipper worked with Margaretta Childs, a white city archivist, and several other supporters to acquire the building to create the Avery Institute of Afro-American History and Culture.

The institute partnered with the College of Charleston in 1985 to develop a research center at the old school and it reopened to the public as the Avery Research Center for African American History and Culture in 1990.

As a part of the College’s library system, the Center collects and preserves sources of African American history and culture to encourage interest in and awareness of this rich history in the College’s backyard.

The Center also provides reference and instruction services for the College’s departments, other higher learning institutions and elementary, middle and high schools. It also conducts outreach activities to the greater Charleston community. In 2015, the Center began publishing The South Carolina Black History Bugle, an educational magazine for fifth-grade students. 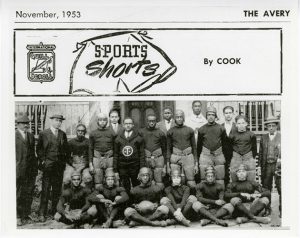 In Avery’s final years, the school had grown to incorporate a variety of extracurricular activities including football, gymnastics, basketball, drama and glee club, courtesy of the Avery Research Center.

“Although the Avery Research Center is no longer a school it still maintains close ties to its original focus of education and social and cultural activism,” says Aaisha Haykal, the manager of archival services at the center. “Furthermore, the act of preserving, documenting, and disseminating the history of the school, its alumni, and the African American experiences in the Lowcountry is a political and revolutionary action as the undertaking of the American Missionary Association to start a school to educate free people of color in 1865.”

In 1981, Professors Lee Drago and Eugene Hunt curated the exhibit “Avery: The Sprit That Would Not Die”, which celebrated Avery’s history. The exhibit was updated by Avery Research Center staff, scholars, and students in 2016 to celebrate the Center’s 30th anniversary and the school’s 150th anniversary.

“What’s fascinating is how Avery both shaped and was shaped by history in Charleston and beyond,” Battle said in 2016.

The center is being renovated and is closed to visitors and researchers. Once it reopens this fall, the Avery Research Center will be open from 10 a.m. to 5 p.m. (closed 12:30 pm – 1:30 pm) Monday to Friday, with several guided tours throughout the day.