By Mike Robertson|2020-03-02T13:08:41-05:00February 23, 2017|Academics|Comments Off on Braille Book Sheds Light on the Solar Eclipse
Geology professor Cassandra Runyon is helping NASA launch a new educational project designed to help blind and visually impaired students learn more about the major solar eclipse late this summer. Runyon and Edinboro University Professor David Hurd wrote a braille book about the Aug. 21, 2017, solar eclipse. The eclipse will be visible over a 60-mile wide track across the continental United States, from the coast of Oregon to the Lowcountry of South Carolina. Using a NASA grant, more than 5,000 free copies of the book will be distributed to schools, libraries, museums and science centers who serve the blind and visually impaired. 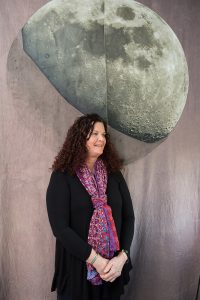 The idea of creating materials for blind and visually impaired students started early for Runyon. “When I was young, my dad challenged me to look at things differently,” she said. “For example, he would ask me to close my eyes and interpret or describe things the best way I could.  I would try to see the colors, the shadows and so forth.  That got me interested in helping others to see things from a different perspective.” Later, she started working with students who were blind and realized that she could help bring her love of science to them. For more than 20 years, Runyon and Hurd have written and produced braille science books. These books have helped blind and visually impaired students learn more about the surface of the moon, Mars and the Solar System in general. She says they came up with the idea of producing this new book last year. For several months, Runyon and Hurd worked together to develop a prototype of this book that they hoped would help blind and visually impaired students learn more about the track of the eclipse and the geometry surrounding the event. After they finished their portion, the book was handed to College of Charleston student Mariah Williams. Williams, a senior at the College who is blind, had the important task of making sure that the book did what it was designed to do. 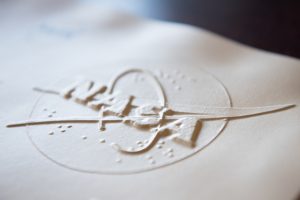 This braille book about the total solar eclipse was funded by a NASA grant.

“I did a lot of testing of the graphics, seeing what was and wasn’t going to work,” says Williams. After moving some text and graphics around and making some minor changes, Williams was happy with the results. Now that the book has been published, it is time to take it on the road. Runyon and Williams will join co-author Hurd and others for a series of meetings and workshops across the nation to talk more about the book and to get it in the hands of people who can benefit from it. Runyon says she has already received some wonderful “thank you” letters from schools and museums who have received advance copies. She says the people are grateful that she and her colleagues are addressing an audience that is often forgotten. “It’s rewarding to engage these people that may not otherwise be engaged.” Photos by Reese Moore.