During Women’s History Month, The College Today will take a look back at the women who led the College of Charleston to become the place it is in 2017. Today, we visit the Sottile House, an iconic campus building that once served as a residence hall for female undergraduates.

Passing by the pale yellow facade of the Sottile House, one can’t help but to be awestruck by the unique features of the Victorian mansion. Carved oak doors, Tiffany-style stained glass windows, and a two-story veranda make for a picturesque postcard (or Instagram post) of the College of Charleston campus.

But did you know this stunning work of architecture was once a residence for female undergraduates?

Built in 1890 by wealthy merchant Sam Wilson, the house is billed as one of the finest examples of Victorian architecture in Charleston. Sold to Albert Sottile in 1912, the home stayed in the Sottile family until it was acquired by the College in 1964 and converted into a residence for female undergrads.

To give a glimpse of the climate of the campus in 1964, read this passage from Nan Morrison’s A History of the College of Charleston:

The traditional way of life at the College of Charleston still retained old mores and customs, as seen in the experience of residential women accepted in fall 1963 who would not be accommodated at 4 Green Street. These women were housed on the third floor of the gym and were required to eat at Craig Union cafeteria, which was several blocks away. In the mornings they put on the skirts and blouses or demure dresses they would wear all day because they were told “ladies do not wear pants on campus even at breakfast.” On the weekends they packed fifteen girls into Peggy Bridge’s grandmother’s car and went to the beach, or they went to Freida’s for pizza burgers, to the pool hall on George Street, or to LaBrasca’s, where they knew that, if they sat downstairs and ordered tea on Sunday, they would be served a mixed drink in a beer stein. 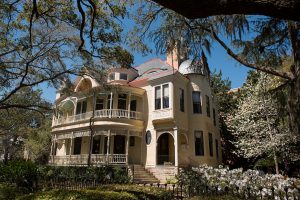 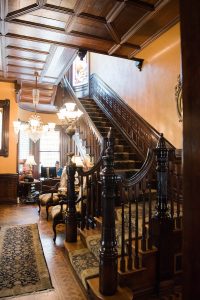 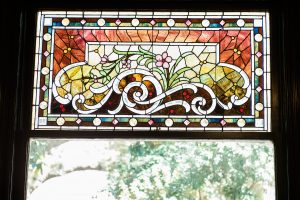 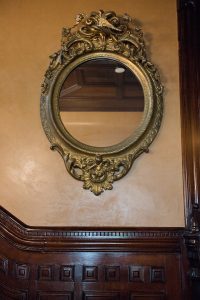 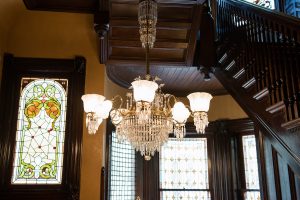 Between the stained glass windows, marble mantels, gold leaf moldings, mahogany china cabinets, and crystal chandeliers, Sottile House had to be one of the most handsome residence halls in the country. There are tales that the students would remove a crystal from the chandeliers upon moving out, and they had to be constantly replaced.

As handsome as the interiors are, the gardens must be mentioned as well. The yard is surrounded by an ornate wrought iron fence and is home to the rose garden of Pi Kappa Phi, which was founded at CofC, and a row of Pierrine Byrd roses, named after the College’s first female graduate.

Today Sottile House serves as offices for the College’s Division of Institutional Advancement.