Twenty-six College of Charleston baseball players and two coaches shaved their heads in a show of solidarity with those battling cancer.

The team hosted its annual Vs. Cancer game on Sunday, April 30, 2017, presented by Great Clips, to raise money for cancer research at the Medical University of South Carolina Children’s Hospital.

“This is a great cause,” says head coach Matt Heath. “I’m glad we can help out in the fight against cancer. Our players did a very good job in raising money and awareness for this. We enjoyed teaming up with Vs. Cancer.”

It was the sixth year CofC baseball has participated in the MUSC fundraiser. To show their support, members of the team shaved their heads on the field after the game, a 6-4 loss to Elon. Donations were accepted throughout the game, and the team raised almost $2,000. Nick Abrams, a patient at MUSC Children’s Hospital, was the honorary captain for the game and event.

Online donations will still be still accepted throughout the season.

The Vs. Cancer Foundation is a non-profit fundraising campaign of the Pediatric Brain Tumor Foundation. The organization is dedicated to saving kids’ lives by empowering athletes and communities to fund lifesaving childhood cancer efforts. Vs. Cancer was founded by Chase Jones, who was diagnosed with Stage IV brain cancer at 18. Jones credits eight years of being cancer-free to community help and national research,

After being treated at the North Carolina Children’s Hospital in Chapel Hill, Jones went on to work with Ronald McDonald House Charities, the Livestrong Foundation and the St. Baldrick’s Foundation before creating the Vs. Cancer Foundation. 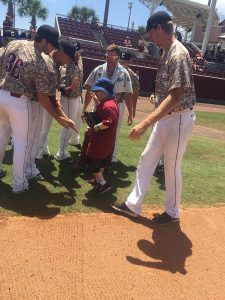 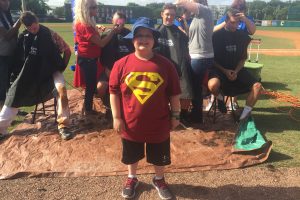 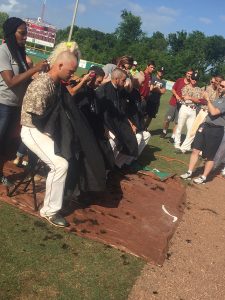