By Editor|2020-02-25T13:00:49-05:00May 4, 2017|Campus Life|Comments Off on Student Composer Maxx Bradley Finds Musical Inspiration at CofC
For privacy reasons YouTube needs your permission to be loaded.
I Accept

He sees it in the obvious places, like restaurants hosting jazz nights around town and the practice rooms of the College of Charleston’s Cato Center for the Arts. But he also finds it where others might forget to look, be it in a calculus class or a movie. He’s even translated the structure of a poem into musical notes.

Perhaps that’s why compositions flow from him at a seemingly breakneck pace. Bradley, a junior music theory and composition major in the Honors College, just unveiled his 10th work, which combined piano with whistling, last week in a concert in the Simons Center. And with dreams to one day write music for film and TV, he says he doesn’t have any intention of slowing down. Maxx Bradley in the practice room. (Photo by Reese Moore)

Bradley, a Charleston native, says he’s been playing piano for 16 years and has been writing music since he was in the eighth grade. But his career in composition took off when Yiorgos Vassilandonakis took him under his wing. The associate professor in CofC’s Department of Music, who has also written music for film and other media, served as Bradley’s mentor while he was in high school.

Under Vassilandonakis’ tutelage, Bradley created a new soundtrack to the Spanish surrealist film Un Chien Andalou (which translates to “An Andalusian Dog”) as part of his high school senior dissertation. Bradley says the original score was “a spritely tango on strings” that was intentionally very jarring and didn’t match the imagery on scene. So he wrote a soundtrack that would be more fitting of a horror movie.

“I created a soundtrack that does fit and augment the horror you see,” he says. “Based on my dissertation, it worked.”

Vassilandonakis says that from that “very ambitious” project, he could tell Bradley had talent, and the professor worked hard to get him to come to he College once he graduated.

“The thesis project involved extensive analysis and research as well as a composition component which, to my amazement, Maxx completed almost effortlessly,” he says. “I of course wanted to work with him more, and did all I could to attract him to the College of Charleston.”

Bradley took his mentor up on the offer and has benefitted immensely. He says he’s been exposed to many more genres and musical tastes than he ever thought possible; on any given day he can step into a Latin music class in the School of the Arts and hear his classmates practicing experimental pieces in rehearsal spaces not far away. And he says he constantly finds inspiration in his non-music courses. “I took honors calculus and ended up loving it,” he says. “It gave me ideas of how to geographically represent music in space. It was really inspirational.”

Another benefit: he gets to hear his classmates playing the music he made.

“(The College of Charleston orchestra) performed a piece of mine and the first few times I heard it in rehearsal was one of the best experiences for me,” he says. “Just hearing the music come to life, that’s an experience you can’t get in any other medium.”

Bradley has had “exponential growth” at the College, according to Vassilandonakis, absorbing every little bit of information into his new works. And he’s been able to keep up with the workload: Vassilandonakis says composition takes years to master, long hours of work and learning to cope with failure. In return for that hard work, CofC composition students such as Bradley get unmatched individual attention from the faculty.

“Our success is our graduates and their association with our program doesn’t end with graduation,” he says.

Professor Edward Hart, the Department of Music chairman, has been working with Bradley this year and adds that Bradley has a curious personality that is invaluable for young composers.

He adds, “the fact that Maxx can study composition at the very highest level while receiving a comprehensive education built on the liberal arts gives him a real advantage over students receiving a ‘music only’ experience.”

Bradley says once he graduates in 2018, he hopes to continue his musical education in graduate school at a top program in California. With any hope that will be the next step to a career writing music for the silver screen, TV and even video games. He also hopes to write stand-alone pieces and teach music composition and theory.

“I’m always trying to apply my music to a story,” he says. “There’s always a story to hear in music.”

As for his professors, there’s little doubt about their pupil. 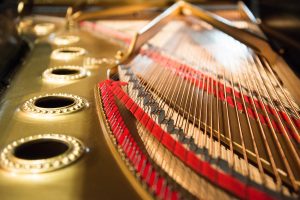 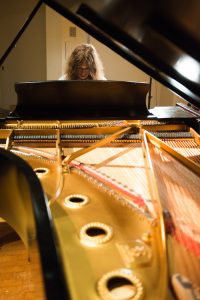 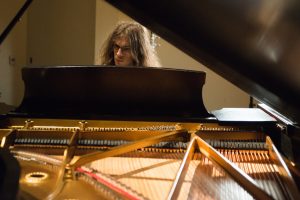 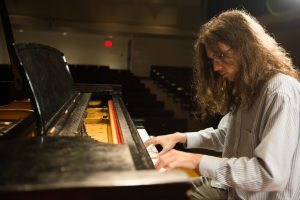 Above images and featured photo by Reese Moore.