CofC Alum Is a Contestant on Fox’s ‘MasterChef’

A College of Charleston alumnus is hoping to be named the next MasterChef. 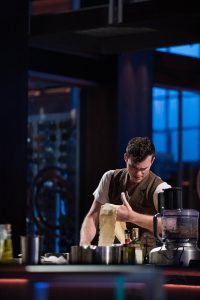 Necco Ceresani ’12 makes pasta during the first round of MasterChef, set to air Wednesday night on Fox. (Photo courtesy of Fox)

Necco Ceresani ’12 will be among 40 contestants to appear in the season eight premiere of the popular cooking competition, which airs at 8 p.m. tonight on Fox. Ceresani, who earned a degree in international  business from the College, will be one of 40 chefs duking it out during the “battle for a white apron,” which eliminates half of the contestants in the first two episodes. If he makes it through the first round, subsequent eliminations and is named America’s best home chef, Ceresani will get a cookbook deal and a $250,000 grand prize.

Ceresani, a Newberry, South Carolina, native who now lives outside of Boston, says that MasterChef is his favorite show. He even tried out for a previous season but didn’t make the cut. Getting the call this time to fly out to Los Angeles to cook for world-renowned chef Gordon Ramsay, Aarón Sanchez and Christina Tosi, he says, was “almost indescribable.”

“I had been working towards that call for what had seemed my entire life and all of a sudden, after the rigors of a long audition process, I found out I get to go to Los Angeles and cook for Gordon Ramsay,” he says. “The only other time I have experienced such a feeling of joy, excitement, and anxiety is when I received my acceptance into The College of Charleston in 2008.” 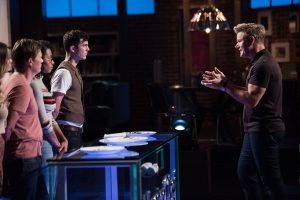 Ceresani and other home chefs listen to instruction from Gordon Ramsay. (Photo courtesy of Fox)

Ceresani says that working with the celebrity chef judges – and especially Ramsay – was a daunting experience. But he says despite the British chef’s no-nonsense persona, he’s genuinely trying to help.

“Gordon isn’t only a giant in the culinary world, he’s also a pretty big guy,” he says. “He moves with the perfection of any master of his trade, which makes you feel intensely novice. But, good or bad, what Gordon has to say is almost always to help you out.”

He adds, “I whole heartedly look forward to representing the Cougar Nation and South Carolina in this season of MasterChef! It’s going to be a wild ride.”

It won’t be Ceresani’s first foray into the food industry, however. He worked at Charleston restaurants, including FIG and Hall’s Chophouse, as an undergrad. And he teamed up with two fellow alums to create Tender, a smartphone app that lets cooks swipe through recipes as though they were using the popular dating app Tinder.