Can you imagine realizing one of your biggest dreams before even graduating college? That’s exactly what Neal Rice did his senior year at the College of Charleston. 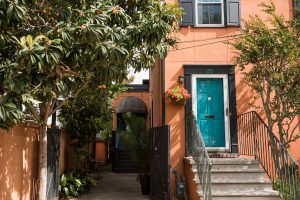 While studying arts management during his final year at the College, Rice decided that a spare addition in his home would make a perfect contemporary art gallery. So, he built built out the space to be Beresford Studios, a 400-square-foot area with hardwood floors and top-to-bottom windows ready for art installations.

In 2015, Rice interned at Redux Contemporary Art Center and loved the vibrancy of working with art and artists.

“While I was there, as I was installing my first show, I realized it was something I wanted to do for a while,” he recalls.

At the time, Redux held about 26 artists; Rice thought their works needed more exposure than what was available in Charleston. He wanted to create a home for local artists. 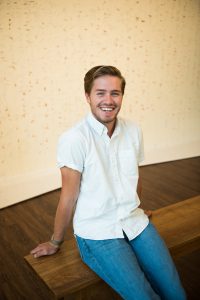 Rice in front of a Hirona Matsuda installation. (Photo by Reese Moore)

“My goal for this is to bridge the fine arts district and up-and-coming artists,” he says.

Rice took a gallery fundamentals course at CofC with Karen Ann Myers, so instead of just taking notes, he went home after class to apply those lessons to Beresford Studios. He also credits internships with Redux, the Halsey Institute of Contemporary Art, Robert Lange Studios, and the City Gallery for furthering his knowledge.

After opening his own gallery, Rice decided he wanted to switch majors — he determined he would get plenty of hands-on experience from manning his business and decided to adopt art history as his major, while making arts management his minor.

“I think this will amplify my knowledge to have more conversations about art and connect the dots from the past, which is really valuable. For example, instead of saying this sculpture is simply a wooden staircase,” Rice points to a Hirona Matsuda ’07 sculpture that was on display in his gallery, “I can point to influences from the post-minimalist movement.” Rice will take an extra semester to complete his new major while keeping the gallery running.

Beresford Studios will host its third show with artist Paul Cristina and We Were Never Told the Truth About the Dying of the Sun, an exhibition of new paintings and drawings on paper and canvas. The opening starts at 6 p.m. on June 9 at the space at 20 Fulton St.