Sure, it might leave us in the dark for a moment this August, but – for so many of us – the upcoming solar eclipse is shedding light on topics that will stick with us forever.

“It has already been a huge learning experience for us all,” says senior Kensley Burriss, a double major in physics and data science and president of the College of Charleston’s chapter of the Society of Physics Students. “It’s cool to be a part of something like this.” 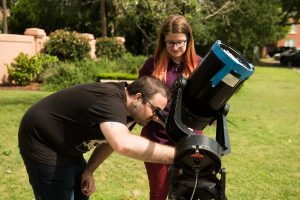 Members of CofC’s Society of Physics Students chapter operate a solar telescope during an outreach visit to the Allegro Charter School of Music in downtown Charleston. (Photo by Reese Moore)

And when it comes to the $1,500 eclipse-related education and outreach grant that the Society of Physics Students landed last semester, Burriss is certainly a big part of this. Together with senior Lee Netherly, she was one of the co-writers for the proposal to the South Carolina Space Grant Consortium, and has thus been part of the society’s 2017 Solar Eclipse Initiative Grant from the very beginning.

“When I found out about the call for proposals, I immediately approached the students with the possibility of writing it,” says Mike Larsen, associate professor of physics and adviser to the College’s chapter of the society, explaining that the students were involved in both drafting and editing the proposal. “The way I thought of it was as a résumé builder and an experience that will be good for them to have in the future. It is relatively rare that our students get the opportunity to truly experience scientific writing like this. It’s a process that a lot of students aren’t aware is so much a part of the scientific field – it’s a big part of careers in science. It’s a pretty complicated process, too, especially when it there are several people working on it: It has to be very collaborative.”

RELATED: Read more stories about the 2017 Solar Eclipse on The College Today.

That collaboration was one of the most important takeaways for the students.

“I learned that it is very important to rely on other people for help. It takes teamwork,” says Burriss. “I definitely learned how important it is to work together and learn together.” 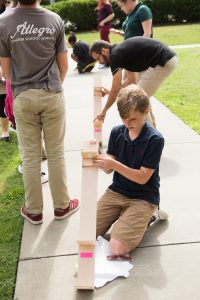 Students at Allegro Charter School of Music learn how to make pinhole cameras to view the upcoming solar eclipse. (Photo by Reese Moore)

And, with that lesson under its belt, the Society of Physics Students was awarded the grant for South Carolina outreach and education about the logistics, safety and scientific basics of total eclipses of the sun – both prior to and the day of the 2017 eclipse.

“Leading up the eclipse day, we are going to schools and other settings to teach them about eclipses and what they’ll see and how they’ll see it,” says Netherly, who serves as the outreach coordinator for the College’s Society of Physics Students chapter. “So, in addition to the basic education, the visits include more hands-on preparation and running tutorials on the special solar telescopes and how to construct pinhole cameras and home-built viewing systems.”

The fact that one of the systems the Society of Physics Students is demonstrating during its visits was developed by senior instructor of astronomy Terry Richardson just gives the College’s Department of Physics and Astronomy one more opportunity to shine. Richardson’s viewer allows multiple people to simultaneously and safely observe the sun in real time, making it the perfect system for classroom use before, during and after the day of the eclipse.

“Talking to kids is an experiment in wonder; they love everything you say and have fantastic questions you’d never think of,” says physics professor Laura Penny. “But I hope the students learn that they really can make a difference in how grownups think about scientists and science, too. A one-on-one interaction can make a big impact on an adult who is unsure about science.” 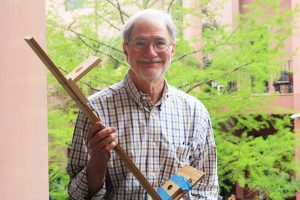 The Society of Physics Students students will get a taste of that impact on the day of the eclipse, which will perhaps be the physics department’s biggest moment in the spotlight. On Aug. 21, society members and departmental faculty will spread across the Lowcountry to hand out solar eclipse viewing glasses, provide crowd management, ensure viewing safety, serve as experts about the phases of the eclipse and answer any questions the public might have.

“The public doesn’t necessarily know a whole lot about what they’ll be seeing, so we’ll be there to point out what’s cool about the eclipse for people,” says Burriss. “You can see a lot that you normally cannot see: the corona [atmosphere] around the sun and the stars near the sun. It’s cool because, to see these things, everything has to line up perfectly.”

Penny says lining up perfectly with the eclipse’s path of totality adds to the experience.

“To have the path go directly over your house or your school is rarer than once in a lifetime,” she says.

Speaking of alignment, the eclipse’s path of totality has also positioned the College of Charleston in a favorable light.

It’s one of the many things the 2017 solar eclipse will bring to light for years to come.