For most people with her workload, a steady stream of caffeine is a necessity. So, it’s a good thing that Laura Westby Cannon ’09 is a co-owner of a coffeehouse.

Her schedule on Wednesdays, her busiest day, illustrates her breakneck pace. She opens up the Orange Spot Coffeehouse in North Charleston’s eclectic Park Circle neighborhood at 5 a.m. She works the espresso machine, takes orders from customers looking for a morning pick-me-up, and makes sure the place is humming along until 11 a.m.

By noon, she’s got to make it down to the College’s downtown campus – that includes finding one of those mythical downtown parking spots – for a graduate assistantship that lasts until 4 p.m. She gets an hour break, and then it’s off to more than six hours of writing workshops and poetry survey classes. She wraps up her day at about 10 p.m.

Somewhere in there, she’s still got to find time to work on her novel.

“I have to have a very regimented schedule,” she says. “But it’s a means to an end and I’m able to do what I love and am passionate about.”

Cannon is one of 12 writers in the College’s new M.F.A. program in creative writing, which held its first classes in the fall of 2016. It’s the College’s first and only terminal degree program to date, and has already proven a valuable gateway for Cannon and others into the literary world.

“Our horizons have been expanded,” she says.

Cannon graduated from the College in 2009, majoring in English with a concentration in creative writing, but she didn’t immediately pursue an M.F.A. workshop outside of Charleston. She opted instead to start up the Orange Spot with her husband, Matthew, and friend Julie Simuang in 2013. The small cinderblock coffeehouse isn’t much larger than a couple of rooms in a Charleston carriage house, but its quirky decor, excellent coffee and tasty brunches quickly made it a go-to spot for java lovers in North Charleston and surrounding areas. Among the regulars was one of Cannon’s former English professors, Bret Lott.

Lott and his faculty colleagues had been trying to launch a creative writing M.F.A. program for many years, but creating the College’s first terminal degree program – that is, one above the master’s level that allows for recipients to pursue tenure-track positions at universities – didn’t come easy.

The first big break came in 2001, when the College took over production of Crazyhorse, a world-renowned literary journal founded in 1960 in Los Angeles by poet Thomas McGrath and included works from Pulitzer Prize–winning authors such as John Updike.

Then, Lott says, about five years ago, the College created a committee to explore the possibility of creating an M.F.A. program. It looked plausible, so the department aimed to accept its first dozen students for the fall 2016 semester.

Lott was at the Orange Spot when he told Cannon about the program. She’d been in his undergraduate workshop classes and he recalled one of her essays, “Danger in the Valley,” about growing up in North Dakota.

“I remembered her from my classes that even then, she had something that was really on the ball,” he says. “She has a really good voice for storytelling.”

Cannon blustered at first because the M.F.A. program focused on fiction and she prefers writing nonfiction. But Lott persisted, telling her that both forms of writing employ the same tools. “I told  her the things we’re teaching here will apply to your creative nonfiction as well,” he says.

Cannon – with the support of her husband and business partner – decided to take Lott up on his offer and applied to the program. She was not only accepted into the program, but was one of two students in the program to receive the Woodfin Scholarship, a $5,000 award given to the two best creative writing portfolios submitted by students accepted into the M.F.A. program.

The scholarships, the other of which was awarded to Nick Plasmati, were made possible through the extraordinary generosity, vision and goodwill of an alumnus and are designed to attract the very best writers from across the country to come study at the College. These awards, which help to offset tuition costs, will be available for renewal for the second year of study. 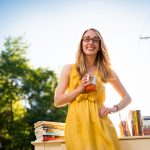 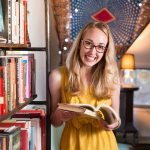 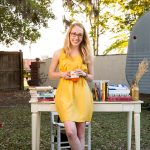 After only one semester, Cannon could tell she’d grown as a writer, even finding a new love for fiction. And she’s embarked on writing a novel about shifting family dynamics through traumatic experiences. The plot follows two children transitioning to adulthood after their father sustains a brain injury that affects how his body and mind age, putting extra pressure on their mother. But Cannon admits she’s already making big structural revisions based on feedback and techniques she’s learned in her workshops.

“I want to explore lost childhood, a family unit’s response to unexpected tragedies like this and the question of how to care for both parents in these types of situations as they age,” she says. “That’s the crux, but we’ll see what happens.”

The new program has also afforded Cannon new ways to interact with the creative communities in Charleston and across the country. She certainly engages with writers and creatives at her coffee house in North Charleston, but through the M.F.A. program, she’s been able to go on retreats across the country with other writers, attend literary conferences in Washington, D.C., and sit in on campus talks through the College’s Crazyhorse Lecture Series.

Among the professional writers who have embraced the program is popular Lowcountry fiction author Dorothea Benton Frank (and the parent of two CofC alumni), who has hosted the College’s M.F.A. writers on several occasions. “These experiences weren’t possible before this program was here,” says Cannon.

Lott says that Cannon’s growth as a writer – and that of all the students in the program – is astounding. It’s a little different from undergraduate workshops, where students have to balance writing with assignments and classes in other disciplines. In the master’s program, he and his fellow M.F.A. professors get to see what happens when a dozen writers sit together and hammer away at the creative writing process for 15 hours a week.

“Just to bring seven people, ten people into a room and concentrate on one thing and focus on it for a semester, and see how much can happen,” he says. “This is a cool thing … who knows what we will have at the end of two years?”

Cannon says that everyone in the program, from the writers to the professors, shares a passion for writing. That passion has drawn them together for constructive workshops and pizza parties at the Orange Spot after a long week. And it’s pushed her to sip a cup of coffee before each 15-hour Wednesday.

“Passion plays a big part in this program,” she says.