The Crew that Makes CofC ‘Most Beautiful’

Bright flower boxes hanging from windows. Freshly — and perfectly — sheared hedges. Pristine sidewalks and lawns. These are some of the first things that draw the attention of new students, their families and others who make their way to the urban oasis that is the College of Charleston Campus.

These features are a big part of why Travel + Leisure readers voted CofC “America’s Most Beautiful College Campus” last week. And there are 14 people on the College’s grounds crew who sweat it out every day to make sure that every feature on campus is in tip-top shape.

“One of the reasons we’re successful is because we care about each other and this job,” says Paty Cowden, the College’s manager of grounds. 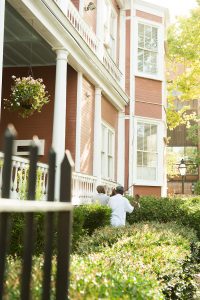 Cowden’s crew is out every day by 7 a.m., doing a route through the campus to check out any issues there might be – whether it’s refuse on the ground, fallen branches in the Cistern Yard or a thirsty-looking plant outside the President’s residence on Glebe Street. They all meet back at the grounds office on Coming Street at 8:30 a.m. to run down the day’s itinerary before heading out again to make sure everything is in peak condition from the flowerbeds and window-side planters to pest control and perfectly swept roads and walkways.

And it goes without saying — but none of this is easy work, especially in the 90-plus-degree days that are common in Charleston throughout the summer (though Cowden recently ordered some cooling towels to help deal with the heat). Sweat, sore muscles, and dirt may as well be in the job description. And the fact that eight of the 14 grounds crew members are older than 58 — Ben Elbert, 69, is the oldest on the staff — makes the work they do all the more impressive.

“The hardest part to keep clean is yourself,” says James Ravenel, grounds supervisor.

Cowden adds, “How they look from the beginning of the day to the end of the day is so different. They’re all dirty and covered in sweat.” 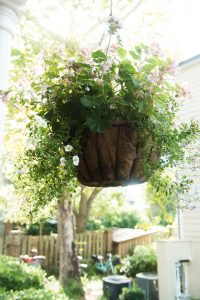 The job comes with its peeves too. The crews have to struggle with visitors and students who don’t throw away trash in the right spot or forget to clean up after their dog — “Please appreciate our work,” quips Lionel Carter —  and they’re always having to keep on top of the sod in the Cistern Yard, since the tight shade provided by the campus lawn’s live oaks makes keeping things green more difficult.

“We’ve tried every type of sod in existence there,” Cowden says. “We’ve resorted to seeding with a perennial rye seed, but we have a hard time keeping it green come July. But this year it’s looking pretty good.”

No doubt, this crew takes their work seriously. Each member of the grounds crew has their own favorite spot on campus — from well-known areas such as the President’s House on Glebe Street and the Cistern Yard to the Stern Center Gardens and flower boxes outside the Lightsey Center. The grounds crew says they find themselves looking critically at other campuses, thinking about what they might do to make those spaces as appealing as CofC.

And they all swelled with pride when they were credited for their work by President Glenn F. McConnell ’69 after CofC won the Travel + Leisure honors.

Cowden adds, “Especially for this time of year, when we feel like we’re never caught up.”