By Alicia Lutz|2020-02-25T13:00:29-05:00July 20, 2017|Alumni|Comments Off on Cougars Hall of Famer Prepares Student-Athletes for the Game of Their Lives
It doesn’t matter how tall you are, how skilled you are, how talented or lucky you are: Without an education and some simple life skills, becoming a big basketball star is going to be a struggle. Former CofC point guard and elementary education major Jermel President ’03 knows this – and he’s determined to educate young basketball players in the Charleston community so that they can succeed. That’s why the Cougar Hall of Famer — who had his number retired by CofC in 2011 and also played under NBA legend Rick Barry in the United States Basketball League — established the DAE (Delores And Estelle) Foundation to educate and train student-athletes to become skilled, effective and responsible citizens of their communities. “Education leads to opportunities, but you’ve got to meet kids where they are, and if they’re on the basketball court, that’s a good place to start,” says President. “Sports is such an equalizer in our culture and our society. Basketball can take you a long way in life if you start developing the right skills early enough.” 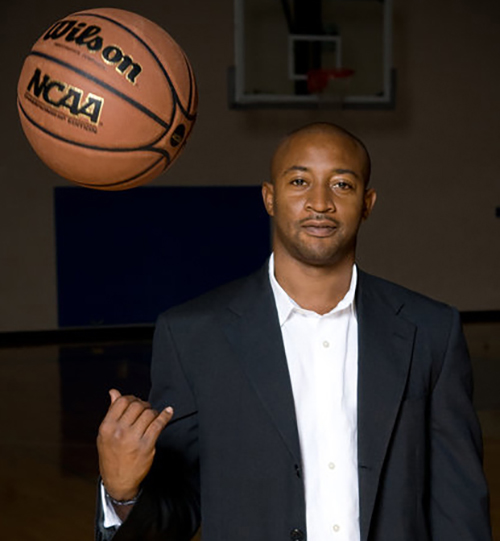 Cougars basketball Hall of Famer Jermel President ’03 is the founder and CEO of the DAE Foundation, preparing Charleston’s youth for futures in basketball and beyond. (Photo provided)

Named in honor of his mother and grandmother, and established in 1999, the DAE Foundation is more than just a skill-development program. President, also the head coach of Oceanside Collegiate Academy in Mount Pleasant, South Carolina, says the foundation takes a holistic approach, providing players with resources, opportunities and life skills and emphasizing the importance of moral character, academic progress, nutritional balance and mental health. “The whole focus is on development. The idea is to fine-tune student-athletes so that they’re as prepared as they can be for whatever their futures hold – off court or on,” says President. “That’s what I want to be doing for these student-athletes: promoting them, preparing them so that they can develop to their fullest potentials.” To do this, President starts early. The foundation has programming for ages 7–17, with everything from Open Gym SunDAEs just to have a little fun to Second Chance Training to focus on getting onto a college team. But it’s the Oatmeal Recipe programming that gets the athletic journey started off right. “They say your first meal of the day is the most important, right?” says President, explaining that the Oatmeal Recipe consists of three ingredients – skill/technique development, nutrition/physical development and college/career education – over three phases. Phase 1 is what President calls the FUN-DA-MENTAL League, which gets players’ heads in the game and lets them have a little fun while learning techniques and skills. Phase 2 is a travel basketball team, which focuses on nutrition, strength and conditioning and SAT/ACT guidance. Phase 3 builds on the first two phases and provides information about college visits, college workouts and clearing house qualifications. “They start with an interest in basketball and, by the end, they have a portfolio and a video to give to five prospect schools where they have a real chance. At the end of the program, each student has all the right ingredients to succeed,” he says. And not just on the court. “Through our development, they learn a lot of life skills. They learn discipline, stick-to-itiveness, how to face adversity, the importance of being on time, showing up, being able to deal with different kinds of people and be a team player,” says President, who has served on the College of Charleston Alumni Board and the Cougar Club Board, and learned many of his own life skills during his time at the College. “I learned to be able to adapt at the College. I learned how to create solutions, make a situation work, find resolutions and execute.” And how did he learn these things? “Two words: John Kresse,” says President. “I was fortunate enough to play under Coach Kresse, and he prepared me for a whole world that I had never been exposed to – from how to conduct yourself at the table to traveling and networking. And he taught me attention to detail – and that’s such an important skill set for any setting. Coach Kresse is the reason for a lot of my success.” As much success as he’s had along the way — both in his basketball career on the court to his entrepreneurial career with the foundation — it’s his son, Jermel Jr., that makes him most proud. He says his 6-year-old son is already leading some practices. “He’s my biggest success story,” beams President. “He absorbs everything on the court and in the meetings I bring him to. He’s learning communication skills, leadership skills, self-worth, his own value.” You can’t put a price on that kind of education. And it all started on the basketball court. “Through the sport of basketball we can teach our kids so much,” he says.