CofC Students Kick-Off the Academic Year with an Eclipse

A moonless night sky briefly blanketed the Holy City Monday, Aug. 21. 2017, in the middle of the afternoon. And 1,500 College of Charleston students, faculty and staff gathered on Rivers Green, behind Addlestone Library, to watch the heavens put on this astronomical show.

“I think this is an amazing – for some people a once-in-a-lifetime – event,” says Ana Oprisan, associate professor of physics, noting that Monday’s eclipse was the second one she’s witnessed. That’s quite the achievement considering things literally have to fall perfectly into place for an eclipse to occur. 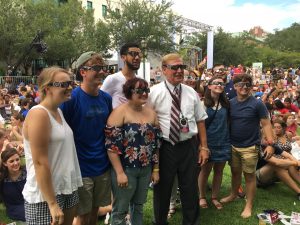 “You need to have the sun, the moon and the earth in perfect alignment,” Oprisan adds. “Depending on the location of the moon relative to the earth and the sun you can get a total eclipse in certain locations on earth. It is an amazing thing.”

Oprisan was among several CofC physics and astronomy professors at the College’s viewing party to answer eclipse-related questions and provide context as the eclipse reached totality.

CofC’s viewing party was the backdrop for NASA TV’s national eclipse broadcast. NASA anchored its eclipse coverage from the College as it tracked the celestial event across the United States from Newport, Oregon, to Charleston, South Carolina, the last city on the path of totality.

The eclipse also set the tone for the start of the College’s academic year, adding an extra sense of excitement as students prepared to start classes on Tuesday. College of Charleston President Glenn F. McConnell ’69 welcomed the Class of 2021 at Convocation Monday morning in the Cistern Yard where Jon Hakkila, CofC Associate Dean and Professor of Astrophysics, gave the incoming freshman a quick tutorial on the astrophysics behind the day’s big event.

“Today’s total solar eclipse is a once-in-a-lifetime event made even more special because it coincides with the beginning of the academic year,” says McConnell. “Our entire campus community – students, faculty and staff – will remember where there were when they witnessed this historic event and be able to fondly recall memories of the College. I want to thank NASA TV for anchoring their broadcast live from the College of Charleston and for their longstanding relationship with our university.”

Despite mostly cloudy skies Monday afternoon, students remained enthusiastic, excitedly glimpsing up at the sky whenever the clouds parted and the sun emerged. McConnell tossed water and popsicles to students lounging in the square. Some students bided their time playing Connect Four, while others took turns getting a closer look at the eclipse through telescopes. And plenty of silly-faced photos and selfies captured the moments leading up to the full eclipse.

As a child growing up in North Carolina, junior Nathan Taylor says he saw a partial eclipse. Seeing a total eclipse on Monday as a young adult was even more poignant for the theatre major. 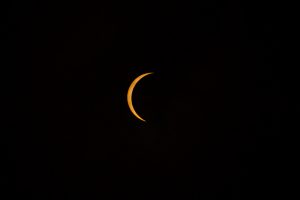 “The only reason we are where we are is because of humanity’s desire to discover and explore and do the impossible,” says Taylor. “And I feel like events like this recapture that feeling and they get people excited about that again and it gets people excited about what’s beyond everyday life.”

First-year student Carliss Blackwell chatted and laughed with friends as she waited for the eclipse. The sudden loss of light and drop in temperature was a physical reminder of the unique event.

“It shouldn’t be this dark right now,” says Blackwell, noting how cool the temperature had become in the minutes before totality. “It feels so good outside.”

Cheers erupted as the sky went black with chants of “CofC, CofC” rippling through the crowd. As students filed out, senior Lienne Barrise reflected on the experience.

“It was ethereal,” says Barrise. “It was so cool and like atmospheric. It was amazing.”