As students and professors alike filled the Barnet Courtyard on August 23, 2017, the Jewish Student Union (JSU) kicked off the fall semester with a friendly Welcome Back Cookout.

With weekly Meet-to-Eat gatherings and regular Shabbat Dinners, the JSU has established a tight-knit community at the College of Charleston. Beginning over 15 years ago, the Shabbat dinners were student-run and designed to unite the Jewish student body. What started as a small-scale effort has become a widely popular tradition, attracting nearly 70 students every Friday. Although the JSU was built on a strong Jewish foundation, students of all faiths are encouraged to attend these campus-wide events. 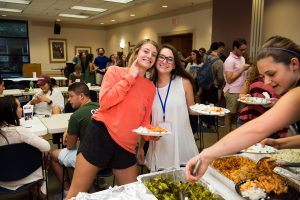 These frequent get-togethers hold a deeper meaning for the students who put them together.

“Regardless of ethnicity, race, or religion, it is important that we all come together” says Marni Sapolsky, the current social action chair of the JSU. “It’s a chance to relate to many people on another level,” she adds as the crowd shuffles through the buffet. Sapolsky attends the dinners every Wednesday and Friday, introducing her to a diverse range of students.

Opening up the JSU festivities to all students has been a successful pursuit as several non Jewish classmates mingle about the courtyard.

“I have good conversation with people that I wouldn’t normally have dinner with” says Leah Palmadessa, a senior who says she does not practice any particular religion.

Despite her secular background, Palmadessa attends the JSU gatherings about twice a month for the opportunity to gain a new perspective. 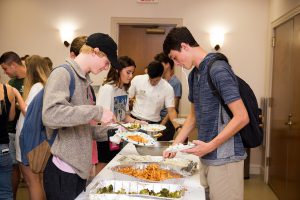 Students line up for a tasty dinner at a recent JSU Meet-to-Eat. (Photo by Reese Moore)

“Nothing brings people together like food,” she says with a smile.

The display of delicious food does lend a hand in creating the welcoming environment that the JSU works hard to maintain. Sapolsky looks forward to the pasta alfredo, while Palmadessa chooses the falafel.

College of Charleston students are free to join the rest of the JSU members for Meet-to-Eats every Wednesday at 6:30 p.m. and Shabbat Dinners every Friday at 6:30 p.m. Both events are held in Arnold Hall, located in the Jewish Studies building on 96 Wentworth st.